Sharing the Love for the Lone Wolf Adventure Game 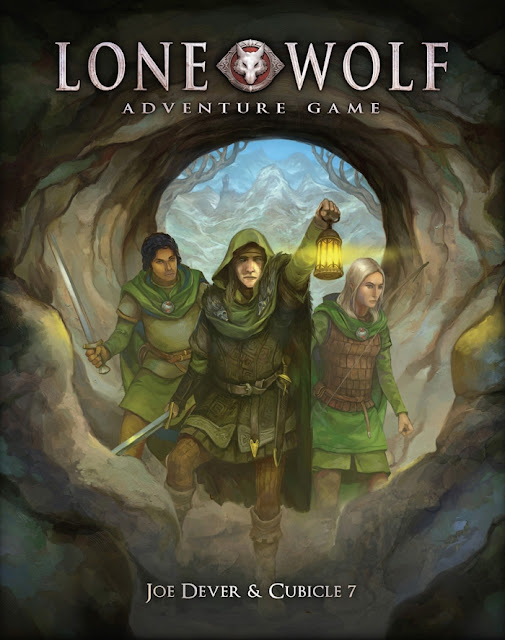 Firstly, a tip of the hat to fellow blogspotter Anthony Simeone over at Once More Unto the Breach for bringing the Lone Wolf Adventure Game to my attention. I have been out of circulation for awhile and stepping back in to find Lone Wolf waiting for me, was a pleasant surprise.

Back in the 80's Lone Wolf was a series of "Choose Your Own Adventure" style books, but unlike most this book had a combat system, and character creation. It was a little solo RPG. What's even cooler is that the books built upon each other forming an epic campaign. Lone Wolf was really an awesome undertaking and there has never been anything else quite like it.

Apparently, a few years ago Mongoose Publishing built an RPG around the original Lone Wolf books and game system. Now this system is super simplistic and originally designed to be playable solo. That said, evolving the system to a full blown RPG while maintaining it's original systems more or less in tact, proved not only possible, but has resulted in a pretty nice little old school style game system.

Mongoose is no longer publishing the game, and I haven't done the research to find out why. What I do know is that Cubicle 7 has picked up the license, done some work to further streamline Mongoose's original product, added some stunning new artwork, and is now releasing a really attractive boxed set called simply, the Lone Wolf Adventure Game.

Joe Dever the author of the original Lone Wolf books is working hand in hand with the Cubicle 7 team to ensure this RPG maintains the flavor of the Lone Wolf franchise both in setting and system. I am holding the results in my hands and they are glorious.

The system at it's simplest requires that you track only a character's Combat Skill and Endurance. On top of this, there are "Disciplines" which are like special skills, talents, and abilities that you can apply to certain tasks. Combat measures the difference in combat skill between opponents and uses a single die roll to report loses for both sides. It reminds me a bit of Tunnels and Trolls, but I like this better.

It's not all perfect unfortunately. The simplicity of the system sees a lot of duplication and crossover in the small set of example characters, and the way the three books are laid out, it can be difficult sometimes to find the information that you need. I like the boxed set, but maybe a single hardcover source book would be better. I'd like to see this in the future.

The limitation of character variety has already been addressed with a new player book, Heroes of Magnamund: Expanded Character Handbook. The print copy is available for pre-order and the PDF is available now. It's loaded with character options that completely open up the system. This too, looks to be based on a product originally produced by Mongoose. It's actually a bit overwhelming in comparison to the core product, but probably a must have if you wish to make a go at using the Lone Wolf Adventure Game as part of a campaign at your gaming table.

I am using the base system (without all the extras) in a play-by-post game with some friends right now, and I must say the system with it's roots in "choose your own adventure" style solo-play is perfect for the play by post environment. Those looking to run something online who don't want to get bogged down in the rules minutia of other table top RPGs should really give Lone Wolf a look.