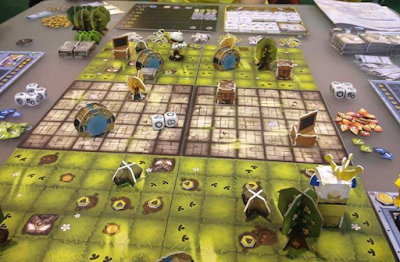 About a month ago I finally received my pre-ordered copy of Krosmaster Quest. With great excitement I set about punching out the cardboard pieces and assembling components. About 7 hours later I had all the little decorative bits of landscape and other sundries together and ready to go. I put the game on the shelf (now in 2 boxes, because it wouldn't all go back into the original) with plans to take it out and play as soon as I was able.

Well, I pulled out the game today in the hopes that my nephew Dominic and I might be able to give the game a test run. Dominic is here visiting his grandma (my sister) over memorial day weekend and it seemed like a bit of questing was in order.

After almost an hour of trying to get my bearings on the basic game (and failing) I decided to go ahead and walk with Dominic through the tutorials. These can sometimes be useful, but often aren't a lot of fun. These tutorials were neither.

Krosmaster Quest is boring. The dice mechanics are awful. The rule book is a slog of nonsensical garbage. The iconography is indecipherable. This game has so far been the greatest disappointment that I have had since entering the board gaming hobby.

We "played" (struggled through) two painful tutorial missions and I lost Dominic completely. It was fine. I was done. We were no closer to understanding how the flow of the game is actually supposed to work. I now understood exactly three of the icons on the player cards, and only two icons on the dice were actually explained even though dice are chiefly (and poorly) used for the basic combat that these tutorials were meant to explain.

Email ThisBlogThis!Share to TwitterShare to FacebookShare to Pinterest
Labels: Board Games, Fail, HeroQuest