I just added Fantastic Four #196 to my collection. This issue begins a new story arc that sees the team reunited in a build-up towards their big 200th issue!

Reed is working with some scientificy group or other who have taken him prisoner for some kind of weird experiments. In New York, Sue is home with Agatha and Franklin when Johnny and Ben arrive. There's a bit of shenanigans on the way to a restaurant as Ben sees a favorite actor whom writer Marv Wolfman gives a fictional name, but who I think is supposed to be John Wayne.

At the restaurant the trio are attacked, first by manifestations of their own worst fears and then by the villain of the issue, The Invincible Man. (Whom I love the look of and would have liked to see again.) The three are defeated and taken to the same scientificy place where Reed is being held prisoner. Here, we get the first big surprise reveal of the issue as we learn why the Invincible Man was able to defeat the three members of the FF so easily. The Invincible Man is, Reed Richards!

Reunited but prisoners, it seems the evil-doers' plans are to use Ben, Sue, and Johnny as leverage to force Reed to do some scientificy inventiony stuffs for them. There's a thrilling escape sequence only to have the group defeated once again in the final two panels for the biggest surprise reveal of all ... the head of the scientificy place and the mastermind behind it all is, Doctor Doom! 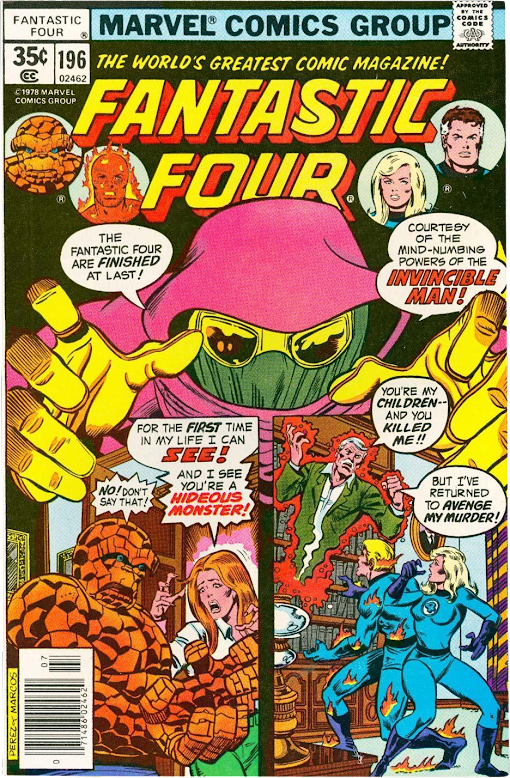 It's a great issue with a lot going on. The story is well paced, and the art by Keith Pollard and Pablo Marcos is fantastic. Pollard isn't an artist one hears a lot of buzz about which is a shame, his work is stellar.

This issue is significant to me personally for a few reasons. It marks the beginning of my first "run" of any comic book. It was spring of 1978. I was 12 years old. The only comics that I got under normal circumstances were the ones that my mom would buy me when she would go to the super-market. That generally amounted to one comic a week.

It might seem like spending 35 cents once a week on a comic is no big deal, but it was. Plus, my sisters didn't have any sort of comparable hobby themselves. Mom would bring me a comic every week and they would get nothing. They didn't collect anything, so there wasn't the impetus. I mean ... Karla wanted a pony, but mom could hardly bring one of those home every week. So, the one comic a week thing was the best mom could do, if not necessarily from a financial standpoint, then from a parent/child/sibling relations standpoint.

What this meant for me though is that my collection was very much a patchwork. My mom really didn't understand much about collecting. Heck, I don't think that I really did either. She'd try to get me a "variety" ... a lot of different characters to read. I didn't have any runs up to this point. But, that Doctor Doom cliffhanger! That had an impact on me. I had to get the rest of this story! And, I did.

This issue caused me to discover something that would change the way I collected comics. I traded with other kids at school to get the exact comic that I wanted. It was brilliant! And it forced me to begin socializing at least a little with my "peers." Something that I was never very good at, or even usually "welcome" to attempt.

Twelve was the perfect age. Other boys my age collected comics too. We would meet in the library and talk about comics, draw comics of our own, and trade comics. I traded to get FF 197, 198, and 199. By the time 200 had come out, we had moved and I lost contact with the first group of friends that I had ever made. Fortunately, I was with mom at the supermarket and was able to pick out #200 myself. Which took some convincing on my part, because it was double sized and nearly twice the price!

This epic 5 issue run of the Fantastic Four elevated the title making the FF my favorite comic book! This is a distinction that is reflected in the comics that I have now, and FF #196 was the last comic that I needed to complete my Fantastic Four collection!

My collection begins with issue #164 which I chose because it was the first issue illustrated by George Perez, and ends with #262 which wraps up a John Byrne storyline just before the team is dragged off to the Secret Wars and comics as I know them are changed forever.

It's a massive 99 issue run spanning November of 1975 to Jan of 1984, and is the biggest run in my collection. It feels great to complete it! Now, I think it's time to settle in and read some comics.