It All Started With Superman

I grew up reading comic books. For as long as I can remember they have been part of my existence. Even before I could read, superheroes encompassed my play and inflamed my imagination.

One of my earliest memories was playing "Superman" with my mom and dad. They were on the couch, and I was "bashing" myself into them declaring myself to be, "Superman." But, they said that they had Kryptonite with which to repel me! I hid behind the couch to shield myself from said Kryptonite before jumping out at them again!

I'm not sure how old I was, but my dad and mom separated when I was five years old so it was some time before that happened. Also, I suffer from some mobility limitations as I was born with cerebral palsy, but I remember "running" and "jumping" in as much as I was able. I couldn't do this when I was much younger than 5 I think, and I would have been wearing braces on my legs. I must have been close to five years old. It's the only childhood memory of my father that I have, and it includes, Superman.

But not the Superman from the comic books. This would have been the TV Superman as portrayed by George Reeves. He was on, I believe, in an early afternoon syndication block right after Lassie, which I loved because the little boy who owned Lassie was a blond haired urchin named, "Jeff;" just like me. (Jeff was Lassie's first owner, replaced after season 4 of the series by the better known, Timmy.) 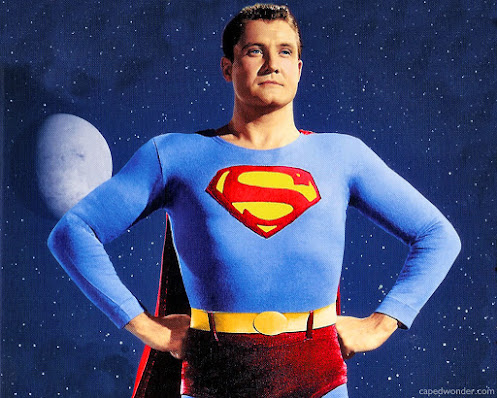 I was obsessed with Superman. And, as a boy who spent half of my early youth in a hospital bed, or when I was home, with casts or corrective braces on my legs, comic books were a perfect distraction. I loved them! And, for a divorced mom raising 3 kids on her own, (Dad vanished not to be seen for almost 30 years, and he didn't pay a dime of child support. Mom did it all alone.) comics were one of the few "extravagances" that she could afford.

The first Superman comic that I can actually remember reading (which I did over and over again) was Superman #300. Significant, I think because it was a special "bicentennial" issue, (with a shelf date of June 1976) because it was the landmark 300th issue, and because it took an imaginary look 25 years into the future to the year 2001.

"Just Imagine The Man of Steel Coming to Earth as a Baby Today --
-- And Growing Up In The World of Tomorrow!" was the challenge posed on the cover that depicted Superman's image standing over an exploding Krypton! 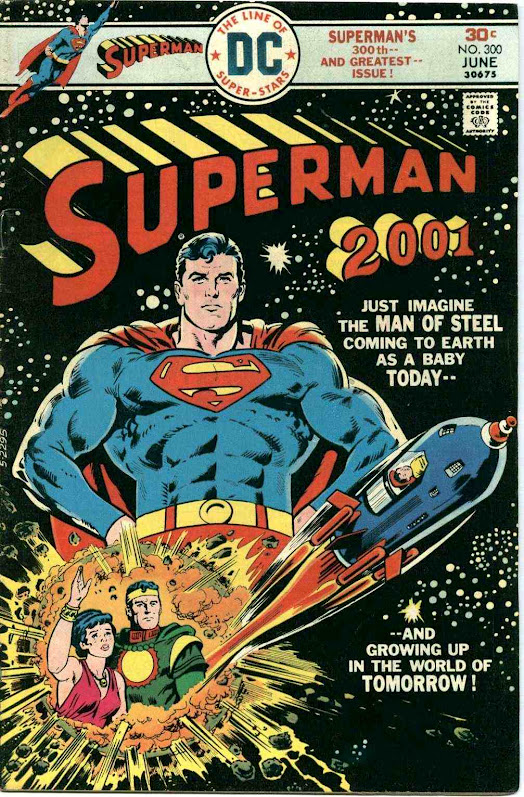 The issue postured a modern retelling of Superman's origin story as if the baby Kal-El came to earth in 1976 and grew up in our world today. It was my first exposure to the Superman origin beyond the opening credit sequence of the aforementioned Superman TV series.

I found that I related to Superman. He was different than those around him, and because he was different he caused those whom he cared for some distress. In my case, I was constantly aware of the "burden" that I represented to my mother. For Superman, the threat of his great power put those he loved in danger.

But, Superman didn't want his power. He didn't ask for it. He wanted to be a normal boy just like me. And just like me he didn't have a choice. He was born with his "disability" and it was simply a fact of his life. So, he (and I) made the best he could with what he was given.

I always loved that Superman just wanted to live a normal life. That's all I wanted too. Superman understood me, and I understood him. Except that he could don a disguise to make himself fit-in ... to become more normal. I could never hide who I was on the outside. But, I certainly spent a fair amount of time pretending to be someone other than myself.

That, however is a story for another time. For now, I leave you with this: It all started with Superman.