Superman and the Flash

The problem with this was that the George Reeves Superman was really "old fashioned." Also, it seemed like only Swan was "allowed" to draw the character, but I knew early on that it was all about the "art" for me. I wanted to see all of my favorite characters drawn by as many different artists as possible. With Superman this would only happen on the covers. Swan always did the interior illustrations. I liked those just fine, but I wanted more. I just loved (and still do) looking at all the different styles of drawings.

It's my mom, once again to the rescue. Comics were sold in the grocery store where we lived when I grew up. That used to be where people got all of their magazines and periodicals. Bread, milk, comic books ... that was the trifecta for me. Mom didn't always bring a comic home, but one book every so often was doable, and I was always very appreciative.

This time it was DC Comics Presents #1. She bought it for me because it had Superman paired with the Flash which seemed like a "two for one" and it was a first issue. The chance to start on a new book from the beginning. Her instincts served her well. DC Comics Presents #1 was awesome!! 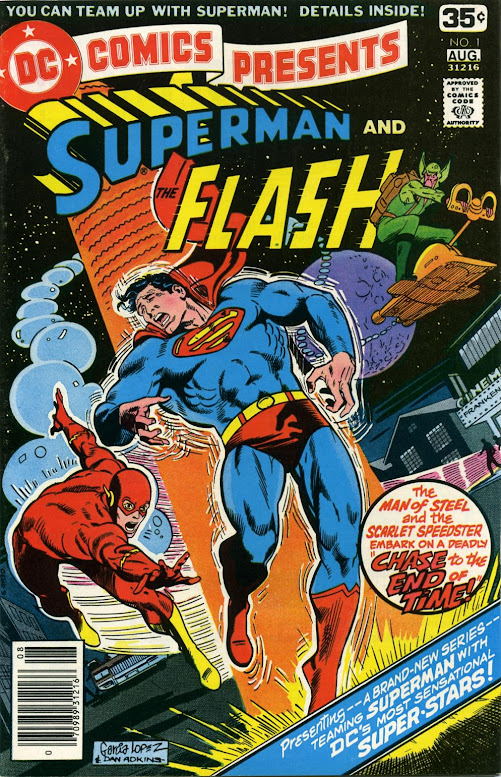 And unlike the normal practice with Superman and Action Comics, the cover artist: Garcia Lopez, also did the story inside. There was so much good here, I am not sure where to even begin. It matched two popular heroes and gave me a chance to see them depicted as I had never seen them before. Where Swan's "Reeves" Superman was somehow always "friendly," Lopez's Superman had a kind of intensity about him, he was bigger somehow ... more heroic. Flash too, somehow bigger and grander and faster than the Irv Novak version of Flash that I had read before.

And it didn't stop there. In subsequent issues Superman was teamed with other heroes and other artists. I loved it. I became obsessed with team-up books. They were a chance to see all of my favorite characters in new ways. There was Batman in The Brave and The Bold, and Spider-Man in Marvel Team-Up, and The Thing in Marvel-Two-In-One. I gobbled them all up! And, now as I build the dream collection of my youth, those team-up comics play a vital role.

I already talked about Marvel-Two-In-One #50, but there are other team-up books that burn hot in my memory. One of them features Spider-Man and I would like to talk about that one next time.