Yellow Jacket and my Mom

Three different men have carried the title of "Dad" for me during my life. The first was my biological father, whom I have already mentioned had really nothing to do with my upbringing; the second was, "Chuck."

It was the summer of 1974. I had just spent the past year living with my Aunt and Uncle. I didn't really understand it at the time, but the stress and pressures of raising three children alone had gotten to be too much for my mom and she needed help. That help came in the form of sending her children to spend a few months with relatives so she could get the rest that she needed and some quiet to pull herself together.

Again, these are things that I would not become aware of until I was much older, but mom had to "fight" to get her children back. I have 2 younger sisters (I also have a much younger brother, but he wasn't born yet.) who like me, were sent to stay with family. I am still not sure that I understand all the details, but attachments were formed, and the breaking of those attachments was met with resistance. I don't think that there were any real "bad guys" here, but there were a great deal of hurt feelings. What matters is that mom did get my sisters back.

When it came time for mom to get me, my Aunt and Uncle flat out refused, but provided reasoning that was difficult for my mom to argue. I was enrolled in school and I was doing well. I must be allowed to finish out the school year. My mom agreed, and I stayed with my Aunt and Uncle for several months more than originally intended.

So, here we are ... summer. And mom and my sisters are on their way to my Aunt and Uncle's house to pick me up ... My mom, my sisters, plus one more. In the interim months between collecting my sisters and waiting for me to finish school, mom met someone. His name was Chuck.

I was excited to meet Chuck, my new dad ... or rather as I announced to him from the back seat of the car, "You're my 'fake' dad." I repeated it a few times. Not to drive home a point, but because I knew it wasn't right. I was trying to find the right term and my mind could not grab hold of it. The term I wanted to announce to display my vast 8 year-old knowledge was, "step-dad." But, instead I called him my "fake-dad" multiple times on the very long drive home that day. I have sometimes worried that I might have hurt his feelings.

Chuck suffered from alcoholism. He believed in parenting with a firm hand, which was something that we weren't used to from my mother, and when he was drunk which was most of the time, this firm hand became unyielding, and sometimes cruel. And as I grew up with him as my "father" over the next five years, I came to despise this man. Now, looking back. He wasn't a villain. He was a drowning man with an addiction doing the best that he could. But that wasn't how I saw him then. 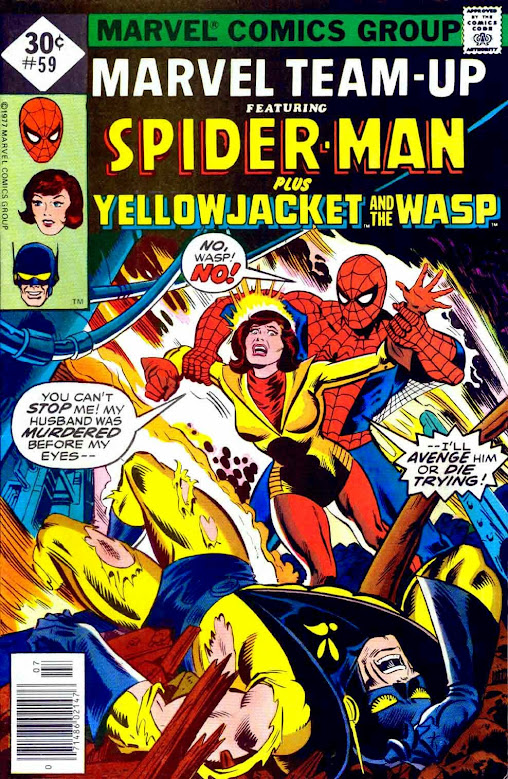 I was talking about Team-Up comics in my last post and it made me want to talk about this comic: Marvel Team-Up #59. It was a night when Chuck had been drinking and his mood was particularly ill. He had passed out, I think and mom crept into my bedroom after I had gone to bed and woke me. She told me to get dressed because we were going out, but to be quiet because we shouldn't wake Chuck. I did as instructed, as my mom woke my two sisters with similar instruction.

We left in the night without really knowing what was going on ... Mom had an overnight bag with her and she grabbed a little bit of clothing for each of us as she ushered us into the car. And we were off into the dark of the night. I was curious about the situation and probably being a bit of a pest. Mom hadn't thought to grab toys or comics or anything to keep us occupied, it's reasonable I guess, for her to assume that we would go to sleep on the ride. But, not me. I was too curious.

I did fall asleep though, and it was morning before I woke up. Mom stopped at a store and got something quick and easy for us to eat for breakfast and she corrected her earlier mistake by getting me a comic (and I think, puzzle books for my sisters) to keep me occupied for the remainder of the trip. It was the aforementioned Marvel Team-Up. Mom got it because Spider-Man was on the cover, but I was more intrigued with Yellow Jacket, a character that I had not known about before now.

Mom explained to us that we were leaving Chuck, my youngest sister wanted to know why, but my other sister and I were older ... we knew. Maybe that's why I liked Yellow Jacket so much. He was married. He had a wife. And they loved each other. At least that's what it looked like in MTU #59. 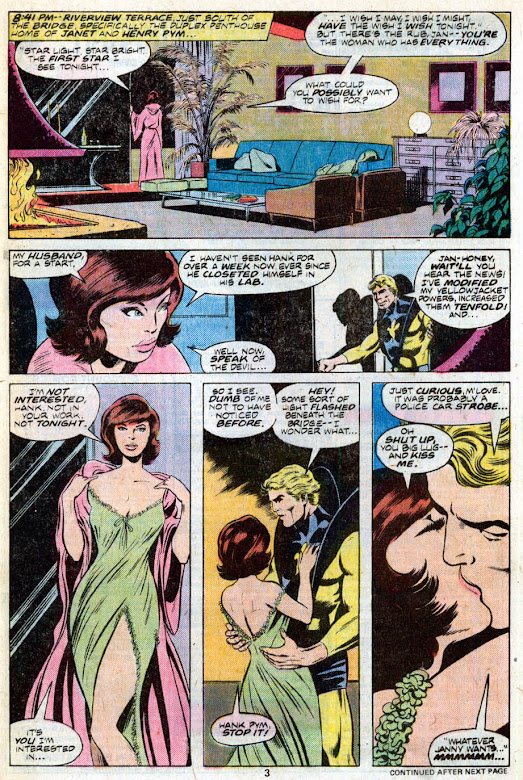 Why couldn't my mom have that? Why couldn't mom be married to Yellow Jacket? We spent a few days with an Aunt and Uncle, not the same as referenced above. This Uncle was actually my very favorite. He had a collection of Science Fiction paper back books and gave me some to take home with me. Which we did (go home ... back with Chuck) a few days later after whatever had happened had gained some time and distance.


I read MTU #59 over and over again. John Byrne's clean line work was traced and re-traced as I taught myself to draw. And this comic ended in a cliffhanger ... Oh, man! Was this a cliffhanger!! 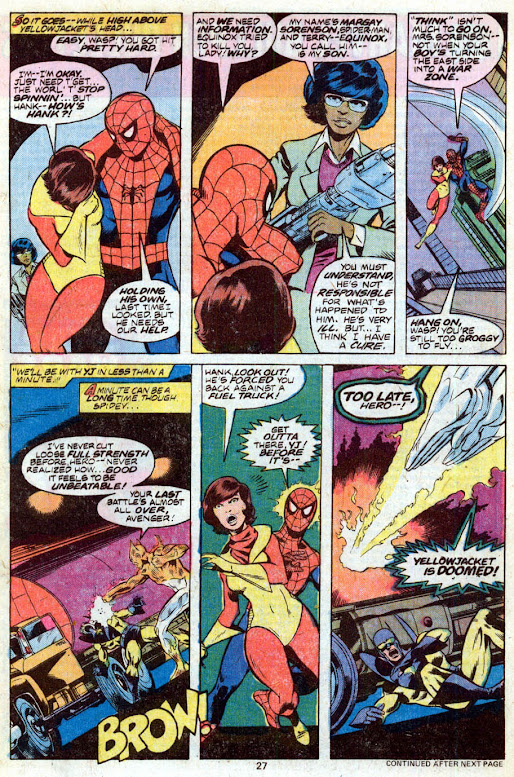 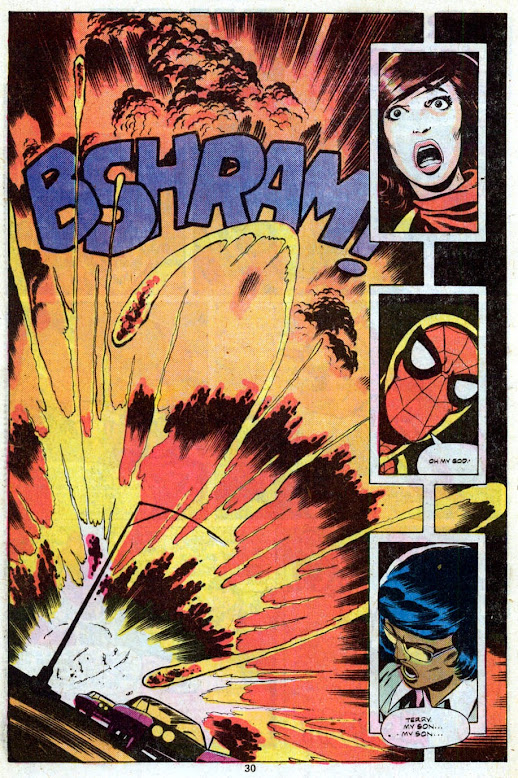 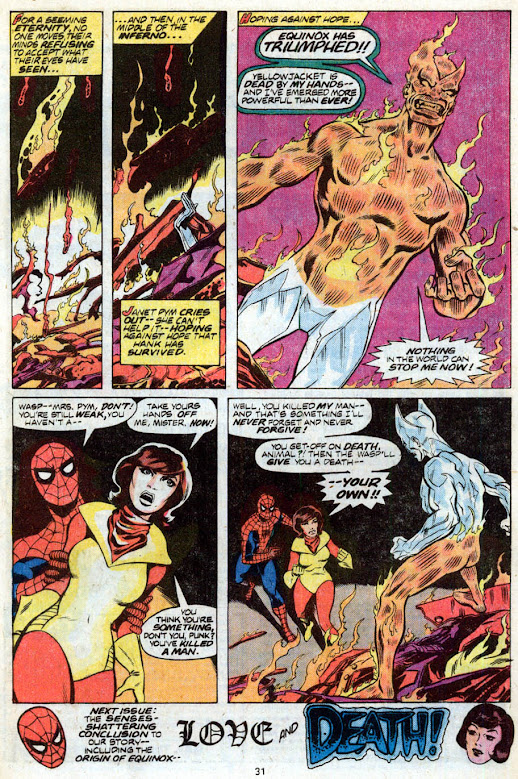 It wasn't until I was older, moved out and on my own that I was able to pick up a copy of Marvel Team-Up #60 to find out what happened. It took me 20 years to find out how Yellow Jacket survives (of course he does!) He will always be one of my favorite heroes.

Maybe it's irony that Yellow Jacket turns out to be abusive to his wife later in his history, but I can't appreciate that. For me the thought of it is heart breaking. I refuse to read those issues, and it's perhaps what is the beginning of the end for me as a comic book collector. At some point, comic books changed from optimistic and hopeful to cynical and mean. That's just not for me. I'll talk a bit about that next time.