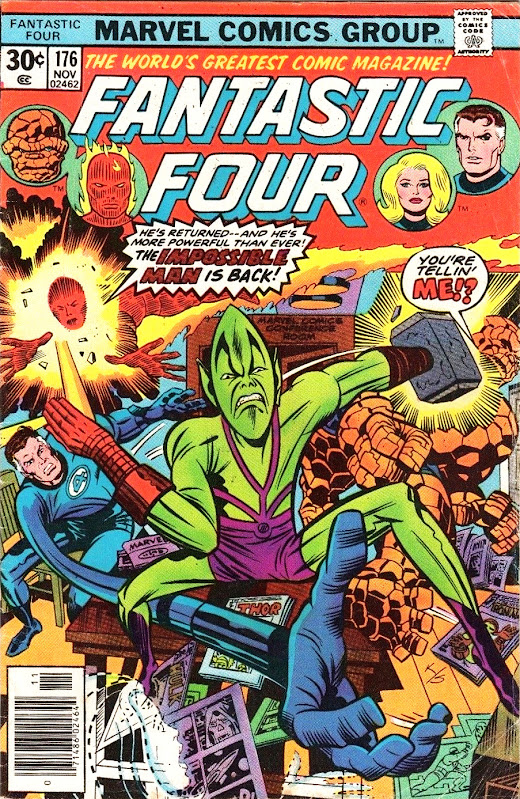 Gosh!! Where should I start with Fantastic Four #176, November 1976? There was a word for the comics that I used to read when I was a kid. It's a word that I am not entirely certain applies to the comics published today (which is the main reason that I no longer read them.) What was that word ... ? Oh, yeah!''

FF #176 is fun! Sinnot is back on art this issue, as is George Perez! Huzzah!! And he never looked better. This is the kind of work that made George Perez a household name after his legendary stint on the New Teen Titans. The work here is gorgeous or should I say, "Georgeous!" And the story ... the story?? The comic has the Impossible Man on the cover! Of course, the story is IMPOSSIBLE!!

It starts out simple enough, the first few pages recap the FF's encounter with Galactus. We are reminded of how Galactus has turned Ben Grimm once again back into the Thing, and how the group now has the zany Impossible Man in tow. This is followed by a surprise crash landing of the FF's space ship, which dumps the whole lot into Central Park in New York. And before you say, "Oh, what a coincidence!" Reed reminds us that this is the same ship that Gorr brought to Central Park a few issues earlier and that those coordinates must have still been programmed in. Too bad Gorr wasn't there to warn the FF not to muck about with the controls. They might have avoided the crash.

Back home in native New York, pandemonium ensues as the group trick a cab driver into allowing all five of them to cram into the back seat (by Sue making herself invisible.) It was silly and sophomoric and could have been a scene from a sitcom of the period, and it was setting the stage for things to come. While Ben was ripping the engine from a (different) cab and holding it up for inspection to prove to Reed that he hadn't hurt it, the Impossible Man was eavesdropping on some tourists who were talking about, of all things: Marvel Comics.

Impy (as I will refer to the Impossible Man for my convenience) decides to pay the Marvel Comics offices a visit. Upon evaluating the service this fine publisher provides to the people of the world, Impy decides that he would like to be featured in his very own comic book. Stan Lee is busy complaining to George (Perez) and Roy (Thomas, who is again writer and editor for this issue) because they can't reach the Fantastic Four (who have been away in outer space.) They need updates so that they can chronicle the dramatized real adventures of the Fantastic Four. Jack Kirby steps up with a useful suggestion, why don't they just make something up?

Lee dismisses the idea out of hand. A made up story in a comic book? Preposterous! It's somewhere around here that Impy confronts Stan and tells them to make a comic book about him, "the Impossible Man!" Stan however is in a particularly disagreeable mood and tells Impy that he can not have his own comic book because he is "too silly looking."

This really upsets Impy who sets about transforming into the weaponized portions of the various superhero images that he sees on display around the walls of the Marvel Bullpen. He becomes Captain America's shield. One hand becomes Thor's hammer, another becomes Iron Man's repulsor ray firing gauntlet, his eyes become Cyclops' visor. You get the picture. There is much chaos and much property damage before the Fantastic Four show up to try to calm things down. Under threat of bodily harm at the hands of the ever lovin' blue-eyed Thing, Stan agrees to give Impy his own comic (a one-shot.)

Impy is over-joyed and things are about to wrap up when one of the people at the bullpen bring a classified add from the paper to the FF's attention. The Frightful Four need a new member and they are holding auditions in their new headquarters, "The Baxter Building!" 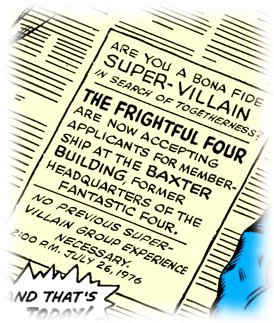 "Are you a Bona Fide Super-Villain in search of togetherness?"

The FF rush to the Baxter Building to confront the Frightful Four for the issue's cliffhanger panel. As mentioned previously, the art this issue is phenomenal. The story by the relentless Roy Thomas is beyond ridiculous, but it does feature cameos of Stan Lee, Jack Kirby, George Perez, Joe Sinnott (his only in comic book appearance according to the Marvel Database,) Roy Thomas, John Verpoorten, Marv Wolfman, Archie Goodwin, Gerry Conway, and Marie Severin.

I enjoyed this comic. Did I mention "fun!"

This is the reason that I collect comic books.

Posted by Jeff Moore at 2:51 PM No comments: