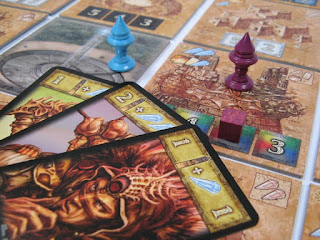 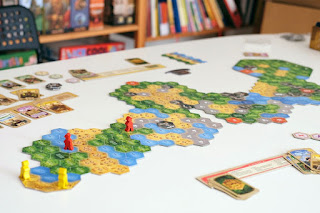 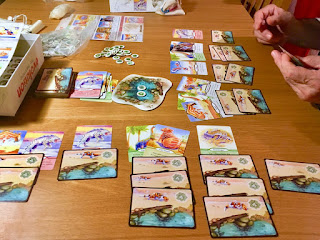 23 – Evolution: The Beginning
Evolution: The Beginning is a family weight engine building card game. Engine building is a genre of game where players build a tableau of cards in front of them designed to provide on-going benefits (an engine.) The best of these allow players to create a synergy between various cards for greater effect. Evolution is really good at this. In this case your “engine” is made up of evolving species of animals. Some animals eat plants while others eat meat, and those will attack your opponents’ cards to stay alive. This “take-that” element would normally turn me off of a game, but here it is so completely integrated in the theme that I don’t mind it. One thing that I don’t like about attack type games is that the weakest players tend to get ganged up on. This isn’t a problem in a two-player game, and personally I would probably only play games like this one with two players. That’s works fine here since
Julie
and I really like Evolution: The Beginning a lot! 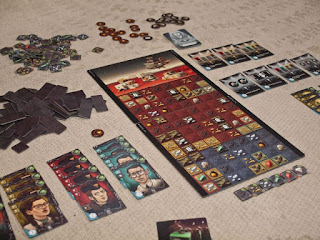 22 – Super Motherload
Like The Quest for El Dorado above, Super Motherload is an awesome deck building game with a neat theme and some pretty cool board game mechanics thrown in. In Super Motherload players are miners on Mars drilling deeper and deeper for the richest resources. The “deck” that you are building is your drilling crew, folks (cards) who will help you to achieve your goals. The board (actually boards) is a depiction of the land that you are drilling into. As you drill you take the rewards shown on the board and then cover the area drilled with black-out tiles to show that the area is now nothing but a hole. The game is played over four boards. When you reach the bottom of one, you place an new board underneath it. You cycle through the boards so you only ever need two on the table at a time, and the game comes with numerous boards (all double sided) for massive replayability. I love Super Motherload. It kind of reminds me of Dig Dug the board game! 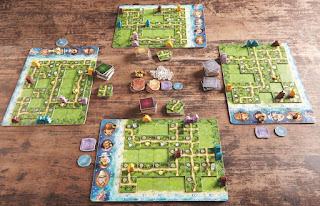 21 – Karuba
Karuba is super easy to understand, but really engaging to play. Here you place tiles that show differing paths through a jungle. Your goal is to create paths for your explorers to reach the temples that match their meeple colors. The tiles are drawn from a bag and the number on the tile is announced BINGO style. Then all players take the tile that was called out and either place it on the board or discard it for movement. When you discard a tile for movement, you are able to move one of your meeple explorers a number of spaces equal to the number of exits from the tile. For example: a straight path has 2 exits, so you can move a meeple 2 spaces; a “T” junction has 3 exits; and a crossroads has 4 exits. Getting to a temple of a specific color first allows you to claim the best treasures (victory points) and some tiles that you place may have gold or gems on them (more victory points.) That’s the whole game: place or discard a tile; get your meeples to their temples as efficiently as you can. Everyone plays at the same time, so Karuba plays as quickly with 4 players as it does with 2. (I have even considered buying a second copy of the game so that I can facilitate up to 8 players.) What’s so awesome is how every player is playing the exact same game, but everyone’s board will look completely different by the end of the game. Karuba is an awesome family game!!
Posted by Jeff Moore at 11:17 AM