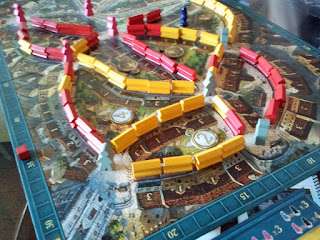 30 – Portobello Market
Portobello Market gets it’s name from the famous road market in London. Players attempt to obtain a majority of market stalls in different sections of the board. Placing your stalls is dependent upon the movement of a Bobby (policeman) meeple, but if you really need him to go somewhere, you can pay him a little coin. Points are scored by the placement of shoppers and some shoppers spend more than others, so you are in competition with the other players to attract the best. It’s an interesting twist on area control, that’s more puzzley than other games of this type and Julie and I really enjoy it. 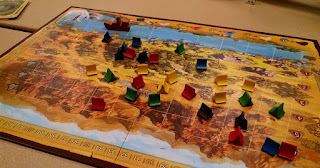 29 – Livingstone
In Livingstone, players are explorers moving down the Zambezi River. On your turn you can take one of the following actions: set a camp, mine for gems, earn some coins, or draw a card. This is a dice drafting game with an interesting mechanism. When you take a die and it comes back around to your turn, the next die that you pick has to be higher than the one you took before. Higher dice give you more valuable actions for greater points, but it means that you don’t get to do as much on your turn. For example, if you take a 6 then you get to set a camp at the farthest spot up the embankment (the most valuable points wise,) draw 6 gems out of the gem bag (giving you the best chance at the most valuable gems,) or take 6 coins, but when the dice pool comes around again, you won’t be able to take another die because nothing is higher than 6. Do you grab the highest die, or grab a lower one hoping to get more actions than your opponents? You can also use a die of any value to draw a card. Cards can give a variety of benefits, but since they work the same with a 1 or a 6, it’s best to use the lower dice to draw cards. Movement down the river is really just a turn counter, but it feels thematic and the game is really fun. Also, everyone has a little treasure box that they can put some coins in each turn. At the end of the game money placed in the box is each players tribute to the Queen. The person who gave the smallest tribute to the Queen is the automatic loser of the game, even if they had the most points. So, be careful not to be too stingy! Livingstone is a great family game! Even Kaylee will play it! 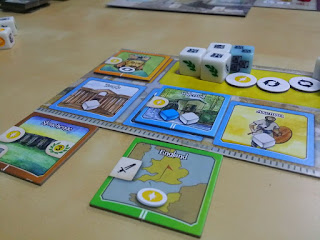 28 – Nations The Dice Game
In Nations The Dice Game, players roll custom dice to gain the resources on the dice to build different buildings to advance their civilization. The buildings give victory points or benefits like certain resources or ways to mitigate your dice rolls, or even new dice to add to your pool. The game is played over 4 rounds and scoring is checked at the end of each round. Building your pool of custom dice is key to winning the game. Different dice favor certain types of results and you will want to optimize the combinations that you collect to obtain the results that you want. Nations The Dice Game is like a deck-building game, but instead of a deck of cards, you’re building a pool of dice. 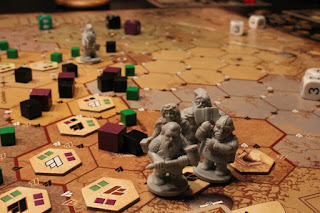 27 – The Dwarves
Based on the novel Die Zwerge [Eng. The Dwarves] by Markus Heitz, the goal of the cooperative game The Dwarves is to keep evil from flooding Girdlegard. Another cooperative game in the mold of pandemic, the Dwarves scores high because of its thematic ties to its source material. Based on a book that I’ve never even read, I still feel transported to the fantasy world that is this game’s setting when I play the game. Evil orcs, elves (yep, elves are evil), and trolls, are all marching their armies toward the Dwarven capital and players must work together to stop them. You must also manage the political climate in the Dwarven council to gain benefits that help you during play and go on quests to level up your characters. Dwarves is a rich cooperative fantasy adventure game and one of the best in my collection. 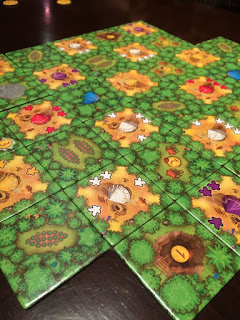 26 – Cacao
Cacao combines tile laying with worker placement in an interesting way. There are a few tiles out on the table to start, and these show actions that a player can take. Players have tiles in their hands that show workers around the outside edges. The actions you take are based upon which tiles you have placed your workers next to. During play new action tiles come out and your options continuously grow as you try to figure out the best way to place your personal tiles to create the best opportunities for your workers. This is a fun puzzley little tile layer about growing and harvesting Cacao. Yum!
Posted by Jeff Moore at 8:07 AM