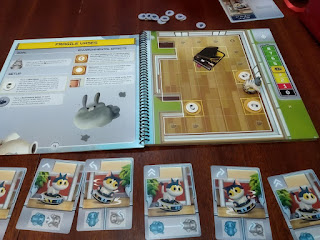 35 – Quirky Circuits
In Quirky Circuits players work together to program a robot to move around a board filled with different objects and try to achieve certain objectives. I talked a bit about programmed movement with River Dragons. The idea is that we all play cards in advance and then watch them play out one at a time. Cards in Quirky Circuits move your robot forward or cause it to turn. Things like that. The trick with Quirky Circuits is that everyone is controlling the same robot and while everyone knows what the goal is, you aren’t allowed to talk strategy. You do have some information. When I play a card in front of me that moves the robot forward, you can see from the back of the card that it’s a movement card, but you have no idea how far. Completing the course is not straight forward because inevitably you won’t draw the cards that you need to move the robot the way that you want. So, you have to get creative, and unfortunately, that will usually throw your teammates for a loop. The thing about it is that it’s actually hilarious to watch the robot veer off course. One mistake means that every card played after that is likely to make matters worse, and all you can do is watch to see what happens as your program gets played out. Quirky Circuits is great, chaotic, unpredictable, fun! 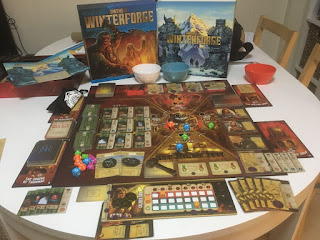 34 – Smiths of Winterforge
In Smiths of Winterforge players are dwarven craftsmen working to forge various items for profit and victory points. This game has a really cool feel to it as you must go to the market place and purchase goods with which to forge the items that you have taken commissions to make. These items have a difficulty number on them that you must roll on your dice. Starting out you will want to craft simple, easy to make items. As you make items you will become more skilled and be able to take on more difficult commissions. In addition to difficulty every commission tells you the types of raw materials needed in the items construction. When you go to buy materials, the quality of material that you buy determines which dice you get to roll. You can spend more money on better materials, or you can buy cheaper materials and hope to pull off a lucky roll. If you fail the roll, don’t worry … you actually gain a token that will make your next attempt a little easier and you can try again. You will eventually succeed, but with cheaper materials you are gambling that the project won’t take too long, because time is money, and money leads to victory. 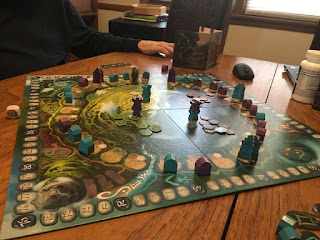 33 – Meduris
Meduris is an awesome little resource management and area control game where you build settlements to gain points. It's got an interesting worker placement mechanic where workers are able to stack on top of each other and the worker on the top of the stack gets the most stuff! I've not seen anything like it in any other game that I've played. All the settlements are built in this large circle and unbroken groups of settlements are worth money to whoever holds the majority of buildings in the group. The groupings can be broken up by the placement of temples and these are key to scoring points. The mechanisms in Meduris are simple, but mastery is tricky.

32 – Walking in Burano
In Walking in Burano Players are building beautiful, brightly colored houses (using cards). Each house section displays specific features like: curtains, lights, flowers, chimneys, or even kitty cats! These score points depending on the resident that you match with the house. The puzzle is in getting the right sections for each house and then matching it with the right person. Matching colors in your houses is also important, but each distinctive color bears a watermark making the game color-blind friendly. "Walking in Burano" is fast, fun and engaging! 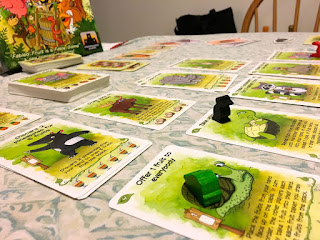 31 – Fabled Fruit
In Fabled Fruit players are collecting sets of fruits (cards) to turn in to purchase fruit juice (more cards.) This is a really neat little set collection worker placement game. The twist here is that the locations that you place your workers on to perform actions are the same cards you are trying to buy for points. So what happens when you buy up a location? A new one takes its place. A new location, with a new ability and a new way to manipulate the system to collect more fruits to make more juice to win the game! Fabled Fruit is an incredible innovation in that every time you play the game is a little different. As players gain points and take cards, new cards come out. New ways to play are introduced, and you barely scratch the surface after a single play. The game gives you a simple method for saving your progress so that you can pick up exactly where you left off. The stack of cards provide 59 different powers, but there are 4 of each card (236 total) so when a new power comes out, it sticks around for a little while so everyone gets a chance to use it, and see how it works before it gets all bought up for victory points and goes away. It took Julie and me several weeks to work our way all the way through that deck and we played it a lot! There was a time when Fabled Fruit was my favorite game. It’s definitely something special.
Posted by Jeff Moore at 2:50 PM