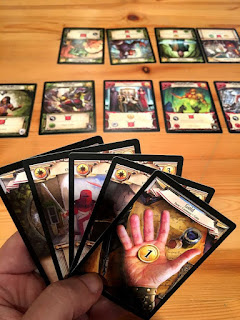 45 – Hero Realms
I shared a lengthy post about Magic and Dominion. I have played and enjoyed these games in the past, but I don’t own or play either of them now. For Magic it’s about the expense and the commitment. Magic is not a game one can play casually very easily. For Dominion its because so many new games have built something more with that game’s foundation that I would simply rather play those games. Hero Realms is one of those games. In fact Hero Realms is the perfect marriage of both Magic The Gathering and Dominion. In Hero Realms you dual your opponent attempting to reduce them to zero health using cards of various types, some that do damage and are discarded, some that stay on the table to do damage round after round. The cards can interact with each other, like in Magic. Hero Realms has a very Magic like feel. This is intentional. In fact I believe the game was designed by some former Magic the Gathering designers. But there is none of the post game commitment that you have in Magic, because in Hero Realms you build your deck as you play. Hero Realms uses all the deck building mechanics of Dominion and adds a “game” to them. Hero Realms is super awesome. It would probably rank higher on my list except that I have not ever played it with
Julie
. For some reason I have it in my head that this might not be her kind of game and we just haven’t played it together. I need to change that, because Hero Realms is one of my favorite games. 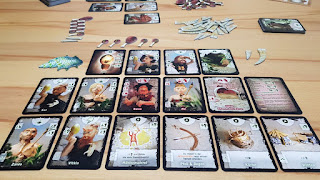 44 – Cavemen the Quest for Fire
And while I am on the subject of card games in a small box, let’s talk about: Cavemen the Quest for Fire. This one I have played with Julie, and we both love it. In Cavemen you gather resources and build dwellings to advance your little cave people society and recruit more cave people. You have to hunt to feed your tribe and kill dinosaurs, all in the hopes of discovering fire and winning the game. The game is fantastic. It’s a fun, compact little civilization building game, and the card art is AMAZING! Each card has a piece of unique artwork (no duplicates here,) and all the art is photographic stills of clay sculptures of scenes and characters and creatures made specifically for this game! Nothing else in my collection looks like this game. It’s just wonderful. 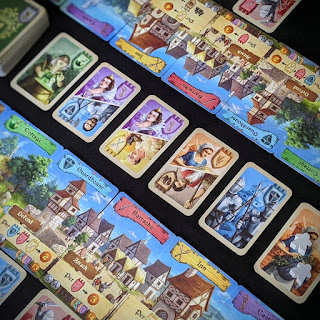 43 – Majesty for the Realm
Majesty has a medieval theme which I love. It was designed by Marc André who also designed Splendor. Marc has a talent for creating a game that focuses on a single game mechanism and doing it well. With Majesty for the Realm it’s all about set collection. While Majesty may look at first glance like a city building game, it’s actually a city populating game. In Majesty all players have the exact same “city” in front of them. This is represented by a set of cards that fit together forming an attractive panorama. As you play, you draft citizenry cards to live in the various buildings, and depending upon how you create your different sets your little medieval town is going to earn you money. There are many ways that the different sets interact with each other and finding the best combination from the cards available to you is key to winning the game. Julie and I have played this several times, but it’s been a while. I think I need to get Majesty back to the table soon. It’s a really good game. 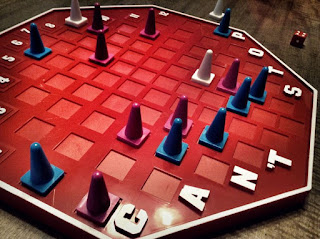 42 – Can’t Stop
So, as I was ranking my games, deciding which games I would be more likely to keep than others, sometimes I would surprise myself. Can’t Stop is a big surprise. It’s such a simple little game. It’s the oldest game on my list by 20 years. (Referring to when it was designed. Can’t Stop was designed in 1980. My next oldest game, River Dragons was designed in 2000.) What’s surprising to me is just how much I love it. Can’t Stop is a super simple press your luck dice game. My “printing” of the game released in 2011. This version has a really nice plastic board that is shaped like a stop sign and player pawns shaped like traffic cones. Each player gets 11 cones in their player color. In addition to this the game comes with 3 white cones and 4 dice. In Can’t Stop you roll the 4 dice and then match them into 2 pairs. You then take two of the three white cones and place them on the board in the column with the number matching the result showing on your two pairs. Now, you roll again. If you can arrange the same numbers as before, you advance the cones. If you can’t, you still have one cone left, so you pick a pair and place that cone. Now with 3 cones on the board, you have to roll one of those three numbers. So you roll again. As long as you can advance at least one cone you can keep going, but if you can’t advance a cone, then you bust and you lose all the progress that you’ve made. So it’s a good idea to stop. When you stop you take the cones of your player color and replace the white cones. This saves your place in those columns. You will now never lose that progress. If you roll that number again you will start from where you saved and advance from there. The first player to reach the top of three columns is the winner. That’s the whole game, and it’s amazing! It’s fast. It’s exciting. It looks great on the table. You can play it with anybody. I will never get rid of Can’t Stop. It’s the perfect family game. 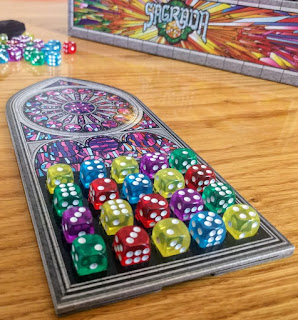 41 – Sagrada
At number 41 is another dice game. In Sagrada players draft dice to add to a player grid in front of them. There are rules for placement like you can’t place the same color or number orthogonally adjacent to each other, but you do always have to place next to another die. You score points for having the most of a certain color of die or for matching specific patterns that change from game to game. The theme of Sagrada is that you are making a stained glass window. So, all the dice are brightly colored and of the see-through variety. It doesn’t really feel like you are making a stained glass window while you are playing the game. It feels a bit more like solving a Sudoku puzzle. That's okay, because the theme isn't about game play, it's just a neat spin around which to build the "look" of the game, and Sagrada looks beautiful! This is a great game that I have had a lot of luck introducing to friends.
Posted by Jeff Moore at 12:36 PM