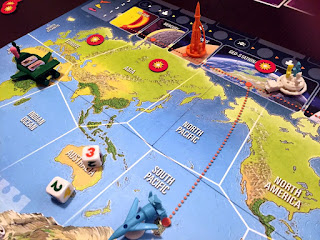 55 – Thunderbirds
This game is based on an old British children’s television show from 1965-1966. The series was an action drama about the Tracy family. Jeff Tracy, the dad (a former astronaut) and his 5 sons (all old enough to drive, but still living at home.) Together the Tracy’s form International Rescue! A super secret rescue squad! Designed by cooperative game, master, Matt Leacock (designer of Pandemic.) Thunderbirds is not content to rest on its IP. This is a great cooperative game! Game play centers around the evil plots of an enemy called: the Hood. International Rescue must thwart the Hood’s plans while also managing various random catastrophic events that come up during play, all based on episodes from the series. Managing these situations involves using International Rescue’s various motor (and rocket) vehicles to travel all over the world and into orbit! The art in the game is photographs from the TV show. That really works here since the characters are all puppets. (Oh, yeah. Thunderbirds was a puppet show.) The card art is wonderful and invocative of nostalgia for the show if you are so inclined. 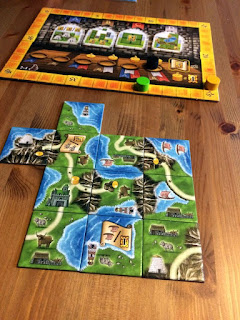 54 – Isle of Skye
In Isle of Skye players draft tiles to create a small kingdom. This process works differently than in any other game that I’ve played and it’s that which elevates Isle of Skye above similar games. Here you must choose three tiles and then price them and offer them back to your opponent. Your opponent gets to buy one of the tiles that you have selected before you get yours. If there is a tile that you really want then you can put a really high price on it to discourage your opponent from buying it, but you then will be paying that very high price for the tile yourself! This creates a really interesting player controlled in game economy. Add to this a modular score board that provides points for tile arrangements that change with every game, and Isle of Skye is truly a masterpiece. 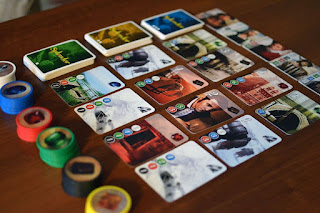 53 – Splendor
“It’s the simple things in life that you treasure.” – Fred Kwan. Splendor has a straight forward and elegant design that elevates it above other games. In the game you collect gems (poker chips) a few at a time and then trade these for cards. The cards create a tableau in front of you and each will have a gem pictured on it. The gems on the cards become a permanent currency that you can add as a bonus to the gem (chips) that you have collected on your turn in order to buy other cards. The more expensive cards grant victory points in addition to increasing your game engine and the first player to reach 15 points wins the game. The art on the cards is beautiful and the poker chips are heavy and of high quality. This game is easy to get to the table, looks great, and is quick to play. I recommend Splendor to everyone even persons who don’t normally play board games. If you only have 5 board games in your collection, Splendor should be one of them. 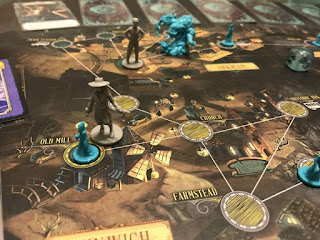 52 – Pandemic Reign of Cthulhu
Pandemic Reign of Cthulhu is a cooperative board game incorporating a theme based on the works of H.P. Lovecraft. Players are adventure heroes trying to stop the ever growing hoards of evil cultists in Victorian Era England. The map here is tight, representing a single town, and loaded with thematic locations. Players work together to close mystical portals opened by cultists who are attempting to summon the Great Old One. If they succeed, it’s game over. I am not necessarily a fan of Cthulhu. I am only tertiarily aware of the mythos and the works of H.P. Lovecraft. However, this setting, it’s implementation in this game, and the sense of adventure, wonder, and horror that it evokes all score high marks with me. Pandemic Reign of Cthulhu is a great game. 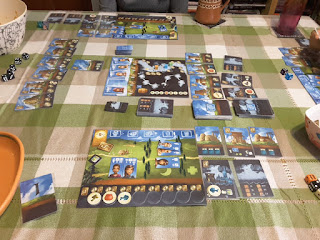 51 – Above and Below
In Above and Below players run a small village community in a mysterious new land. The land is riddled with tunnels and caves and subterranean chambers that hold strange new life forms, and hidden treasures. As you play, you can build above ground structures to expand your village or explore underground to open up new areas. Once these areas are open, then you can build special structures there as well. All this building requires money and in Above and Below you gain money by assigning resources to a sort of commodity time line. The more of the line that is filled, the more cash you are granted at the start of each turn. Resources are also worth victory points depending upon their position in the line. The further down the line a resource is placed, the more its worth. So, there is a push and pull as you struggle with filling your time line early to get more money or holding off to try and get rare resources to place in the first part of the time line saving common resources for later because you can get a lot more victory points that way. This economy puzzle is interesting and fun, but it’s not the main draw of the game. The main draw of the game is the story book. When you go to explore new underground chambers in order to expand your village, the player next to you reads a story from a story book and presents you with a challenge that you must pass in order to clear the chamber and add the card to your tableau. These stories are short and charming. They give Above and Below a sense of wonder and narrative that other games can’t match. For a long time Above and Below was my number one favorite game. It’s awesome!!
Posted by Jeff Moore at 3:35 PM