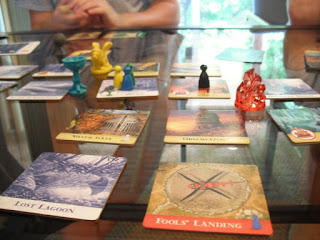 60 – Forbidden Island
Forbidden Island is a cooperative game where players work together to locate treasures on a sinking island and escape before it’s too late. Gathering the treasures is done by drawing cards and collecting sets. Players are working together. So, it’s possible to trade cards to help each other out. But all this takes time and the island is sinking. Mixed in with the cards you need to find the treasures is bad stuff that makes the island sink faster, so doing things as efficiently as possible is key. Forbidden Island is by Pandemic designer Matt Leacock. It’s faster, lighter, and more streamlined but shares a lot of DNA with that game. This one is a great family game and is available super cheap at most department store chains. This used to be my go-to recommendation for introducing families and new gamers to cooperative gaming, but that was before … ah, I’ll talk about that game later!! 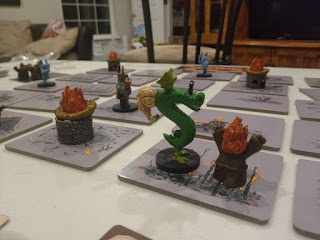 59 – Trogdor!!
Trogdor!! is based on a web-video short from the early days of flash video. A segment from the Homestar Runner series featuring a character named: Strong Bad. I’m not going to go into all of that, but I will say that it is kind of amazing that this game even exists. Trogdor was a character (and not really) featured in a single segment of a niche webseries from a time when webseries weren’t yet a thing. How could such a thing become its own board game? Because Trogdor is that F***ing AWESOME! Julie and I love Trogdor. I bought this game the moment that I knew it existed. What is the game like? It doesn’t matter – Trogdor!! How does it play? It doesn’t matter – Trogdor!! How do you win? – Trogdor!! Okay, so this is a cooperative game where you take turns controlling Trogdor to burninate the countryside and burninate all the peasants. (When you burninate a peasant he runs around with his head aflame catching other things on fire – groovy!) It actually has a lot in common with Forbidden Island above, except instead of trying to keep an island from sinking, your goal is the opposite and you are trying to destroy everything. It’s light easy fun. If you don’t know the theme then I would not recommend this one over Forbidden Island, but for Julie and me, this theme escalates this game above many others! We love it – Trogdor!! 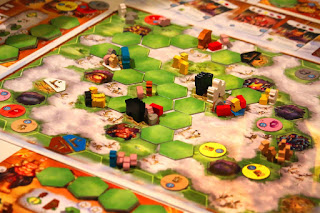 58 – Via Nebula
Via Nebula is a pick-up and deliver game with a twist. In Via Nebula players live in a fantasy world covered by a poisonous fog. In order to survive players must clear out the fog (creating pathways) and find resources so that their community can survive and thrive. Cutting paths through the mists by placing tiles on the board is interesting. Once a path is cleared other players can use it as well. So, there is a bit of push and pull there as you try to decide the best way to help yourself without helping the other players too much. You discover new areas, build new buildings, grow your game engine while everyone else does the same. The board feels tight even at 2 players and the theme of a world covered in a deadly mist is pretty cool. Components and art are beautiful. Via Nebula is a wonderful game. – Trogdor!! 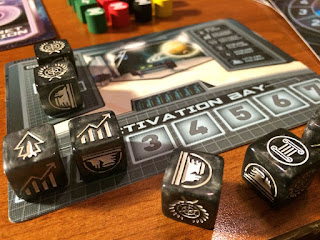 57 – Tiny Epic Galaxies
This is a dice game where you fly to distant planets (cards) to add them to your empire by diplomacy or conquest. Each planet grants benefits that will make your galactic empire stronger. Tiny Epic Galaxies is a great little space exploration / civilization game without the player conflict / war game elements that usually ruin these kinds of games for me. The game comes with awesome custom dice that represent different aspects of your civilization and actions that you can take on your turn. At first you don’t really have a direction and are a slave to the dice rolls, but as you collect planets and gain abilities this grants you a lot of power to mitigate the dice rolls and take the game in the direction that you want as you strategize your way to victory. Tiny Epic Galaxies comes in a small package, but is a deep interesting game. Julie and I love dice games, and this is one of the best! 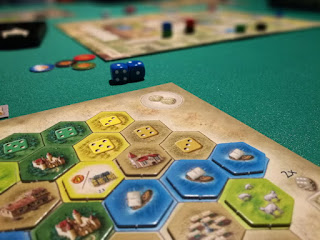