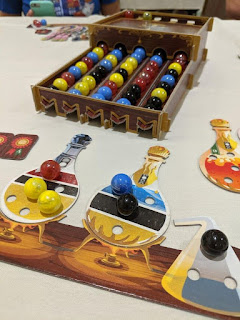 65 – Potion Explosion
Potion Explosion plays like one of those match-3 game apps on your phone like Candy Crush. Players select a marble from a tray causing other marbles in the same column of the tray to slide down. If two or more marbles of the same color collide as a result of the marble that you removed, they “explode” and you get to take those marbles too. If removing the exploding marbles again causes two (or more) marbles of the same color to collide, then these marbles explode too causing a chain reaction! The premise (such that it is) is that these marbles are ingredients in potions and that you are taking your final exam in alchemy class. Players compete to make the most / best potion to earn a high grade (victory points.) The potions themselves each give you a special ability allowing you to gather more marbles for making more potions. Potion Explosion is a neat little game that is very accessible and family friendly. The marble dispenser looks awesome on the table and it works great! 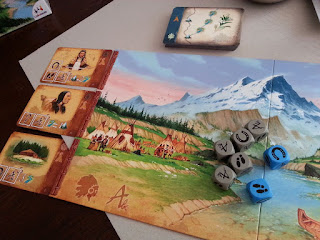 64 – Discoveries: The Journals of Lewis and Clark
In Discoveries: The Journals of Lewis and Clark players are travelers on the Corps of Discovery Expedition moving westward across the United States, investigating new lands and documenting the plants, animal life, and geography of the area, as well as establishing trade with local Native American tribes. Discoveries is a dice game. Every player begins with a set of dice in their player color. On your turn you roll the dice and then choose to assign one specific die face to apply to actions on your player board. Each turn you will assign different die faces and when you have exhausted your die pool, you will be able to take dice back to roll all over again. This last bit is interesting because exhausted dice are placed on a central player board. When you choose to take dice back, you may take dice from this board. When you do this, you can end up with dice that are not of your player color. The other option when collecting spent dice is to take back all the dice of your own player color. This includes dice of your color that another player might have in their pool. It’s an interesting “shared dice” economy that is a big part of decision making in the game. Dice are used on your turn to complete actions. There are travel actions that allow you to cross rivers and mountains in order to complete terrain cards. Cards often have images of indigenous flora or fauna on them and collecting sets of these is one way to score points. Dice actions might also allow you to negotiate with Native American Tribes. Gaining these cards gives you powerful ways to mitigate your dice rolls and also provide you with victory points. The artwork in Discoveries is beautiful. The theme is interesting and well represented. Discoveries is a fun and immersive dice game, and I highly recommend it. 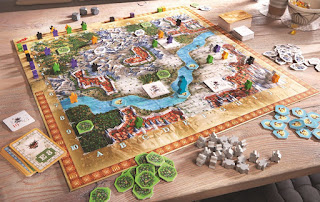 63 – Adventure Land
Adventure Land is an interesting sort of puzzle game. The large game board depicts a fantasy kingdom. The entire board is divided into cells, rows and columns that intersect, for movement. Players have a handful of meeples that they can move from the top left of the board to the lower right of the board. When a player moves they choose a meeple and move it as far as they wish in a single direction. They can move as far as they want to the right or down, but can never go back. On the board are various features that need to be encountered for points. The challenge of the game is deciding how far to move on a turn, and where to stop. If you rush too far ahead to gather what seems to be the most valuable treasures, then you are going to leave the area behind you available for your opponent to graze at their leisure. Remember, you only have so many meeples and you can never move backward. Features that you encounter on your journey might be magic swords for combat, or deadly monsters, or healing herbs. The fantasy theme is represented here. There is a river that has valuable gold in it, but it also has a river monster that kills adventurers who linger too long. Adventure Land is a curious exercise in delayed gratification. Which as bizarre as it sounds, makes for a surprisingly fun board game! 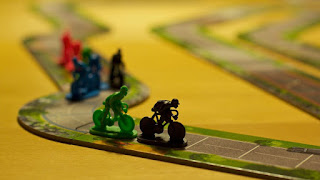 62 – Flamme Rouge
In Flamme Rouge each player controls a team of two bicyclists in their player color. Each of your bicyclists are different and represented by different miniatures. One (the sprinter) has a hunched down mini showing the effort of the rider to pedal as fast as they can. The other mini (the roller) is sitting more upright in their seat. The two bicyclists are represented by unique decks of cards. The sprinter deck has both higher numbered (faster) and lower numbered (slower) cards. The roller is more even keeled with cards consistently in the mid range. You always move both of your bicyclists on a turn, but you choose which rider to draw for first. You draw 4 cards and choose one, returning the unselected cards face-up to the bottom of the deck. Then you do this again for the other bicyclist. Then everyone moves their bikes. After this, bikes that are only 1 space behind a pack get to move up and close the gap. This is a simple “slip-streaming” or “drafting” mechanism. Finally, any bicyclist at the front of a pack gets an exhaustion card added to the bottom of their deck. All of this is pretty simple and straight forward in play, but it does an amazing job of emulating the ebb and flow of a bicycle race. The track is made up of modular pieces so you can create your own race course. The game comes with numerous course examples or you can make your own custom track. First player across the finish line is the winner! 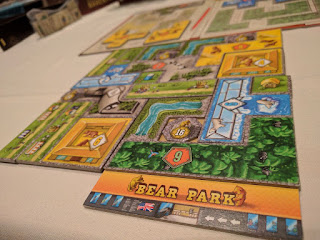 61 – Bärenpark
Bärenpark is a tile laying game where you are trying to fill a space with irregularly shaped tile pieces. It’s kind of a Tetris like experience. The theme of Bärenpark is that you are building a nature park for bears. There are different habitats for black bears, polar bears, panda bears, and koala bears (not true bears, but so cute!) Your player board(s) have some obstacles printed on them that prevent placement and other features that you will need to cover to gain benefits. This makes choosing the right shapes very important, but all the different pieces are in limited supply and the longer you wait to collect a specific tile the less its point value. The game gives each player specific scoring objectives so you might be trying to get “the most polar bears” for example. You also gain special bear statues when you complete an entire section of your park, and like the other tiles these are stacked in descending order so that completing sections the fastest earns the most points. I am a big fan of tile laying games and Bärenpark is one of the best! (
Julie
loves this theme!)
Posted by Jeff Moore at 8:53 AM