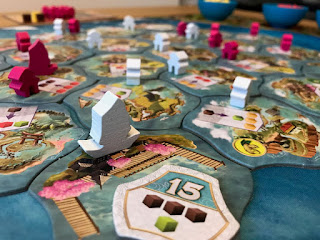 75 – Century: Eastern Wonders
In Century Eastern Wonders players are sailing the seas setting up outposts on various islands in order to use the island’s special ability. All the abilities are about converting one kind of trade good into another, and the goal of the game is to fulfill trade good orders located on special islands on the board. Century Eastern Wonders is part of a trilogy of board games, each with “Century” in the title. The central mechanism for all of these games involves the conversion of one kind of asset into another. Century Eastern Wonders uses pick-up and deliver game-play to accomplish these goals. If you can plan the most efficient trade route to get what you need in the fewest number of turns then you will win the game. This task is different every time because the board is modular and the islands are all placed out randomly, meaning that your puzzle, the best path to take to reach your goals, will never be the same. 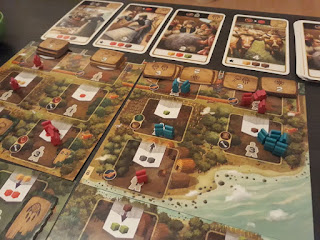 74 – Century: A New World
Another game in the “Century” trilogy, this one uses worker-placement to accomplish the conversion of goods, and again, acquiring the right goods to complete the best contracts will win you the game. Worker placement is a kind of game where every player has multiple playing pieces and each takes a turn placing a piece on the board. Depending upon where you place your piece you gain a special action or benefit. (As this is a Century game, that benefit is usually the conversion of goods.) If you take a spot on the board, then no one else can go there. This creates tension in worker-placement games as you hope another player doesn’t take the spot that you want! Worker-Placement is one of my favorite styles of games, and Century: A New World is a fine example! 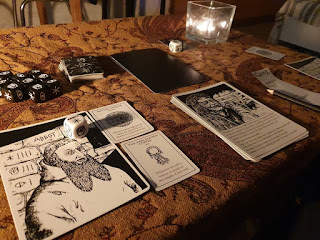 73 – Escape The Dark Castle
Escape the Dark Castle is a cooperative adventure game where players are trying to survive long enough to escape … well, “The Dark Castle.” Said, castle is actually just a deck of 10 large tarot sized playing cards. These cards are over half illustration with the lower half being some flavor text and some instruction on how the players must go about completing the challenge of the card in order to move on to the next one. Completing challenges is done with dice, as Escape The Dark Castle is a dice game. Each player’s character is represented by a custom die, and each castle card challenge is also made up of dice. Players must match the challenge dice to eliminate them and move on. The game play is simple and fast. The strength of Escape the Dark Castle is in the atmosphere of dread created by the stark black and white illustrations that dominate every over-sized castle card, and the eerie flavor text. The game comes with 45 castle cards and since you only use 10 at a time, there is a lot of variety here, and every trip through the Dark Castle is sure to be a little different. 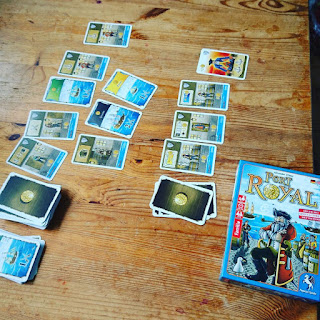 72 – Port Royal
In Port Royal players flip over cards from a large shared deck. In the deck are pirate ships with different colored flags (money – needed to hire people), and people cards featuring different characters from pirate lore (providing powers and victory points). You can draw as many cards as you want, but if you draw two of the same pirate ship then you bust and lose everything. If you stop with 3 or fewer pirate ships (with none of the same) then you can take 1 card from the line-up. If you successfully keep drawing until you have 4 different pirate ships, you can take 2 cards. You get 3 cards for all 5 different ships. After you take your card(s) other players get a chance to take a card that you left behind, but they have to pay you a coin. Play continues until someone reaches 12 victory points and is the winner. Port Royal encourages you to press-your-luck, and that’s a big part of the fun! 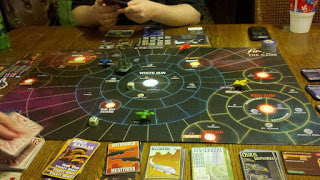 71 – Firefly: The Board Game
Based on the ill-fated television series by Joss Wheadon, Firefly the board game sees players piloting ships through the black looking for work to pay their crew and keep flying. This game is a pick-up and deliver style game that’s all about its theme. Players get to recruit members of the television series: Mal, and Wash, and Zoe, etc. Take jobs to earn money, some legal, some – not so much. The game makes an interesting distinction between jobs that are illegal and jobs that are immoral. Because, these are not the same thing, and that distinction is an important part of the Firefly ‘verse. Firefly is an amazing game that captures its theme perfectly. It’s a big game that takes a long time to play. So, it doesn’t make it to the table as much as I’d like. Which, is a shame, because I have loved every play of this game, every time.
Posted by Jeff Moore at 6:51 PM