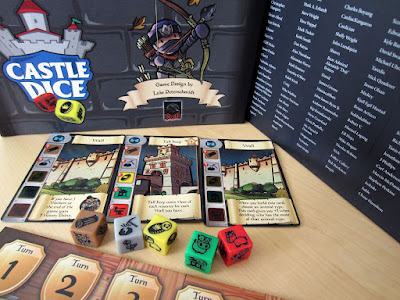 15 – Castle Dice
Castle Dice is this great dice drafting game where you roll dice to gain resources to build up a little medieval community. You build parts of a castle and buildings in your medieval town. You train farmers and guards and workers and merchants. You raise chickens and pigs and cows and horses all by rolling dice. We have an expansion for this one that gives every player a custom draw deck so that the buildings you construct and the abilities that you gain from them will be a little different for each player so that everyone’s town has its players own personal flavor. 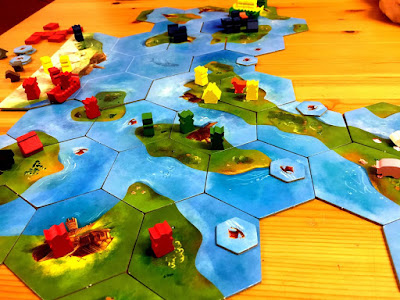 14 – Explorers of the North Sea
In Explorers of the North Sea players take the role of Vikings traveling from island to island gathering livestock, fighting enemy ships, raiding settlements, and discovering new lands. During each turn of Explorers of the North Sea, players place large hex shaped tiles to the table. Each hex shows some water, and some land, and a special feature of some kind. Hexes fit together to form a puzzle piece island network. Each hex has a feature on it, like some kind of livestock, a settlement, or an enemy ship. When you place a new tile, you also place a token matching the depicted feature. For example: if there is an image of some pigs on the land portion of the hex that I just placed, I would take one of the cute little pink wooden pig meeples from the general supply and place it on the hex over the top of the pig artwork. Later, any player might use a Viking meeple to load the cute little pink pig into their long boat. (The meeples really sit in the boats. It's so cute!) Once the pig is delivered back to the mainland, the pig is placed on that player's personal player board for scoring at the end of the game. Settlements for raiding, and enemy ships for battling, work similarly, with defeated enemies being stored by the victorious player for later scoring. After placing your hex tile (and its feature token) you get to take 4 actions on your turn. This could be moving your ship through the water, moving your Vikings over land, moving Vikings to or from ships, transporting livestock, or establishing outposts. All of this stuff gains you points toward winning the game. 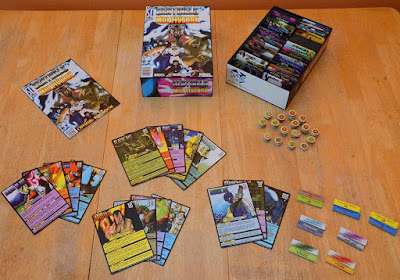 13 – Sentinels of the Multiverse
Sentinels of the Multiverse is a cooperative adventure card game about superheroes!! (So, I love the theme obviously, but what about the game play?) In this cooperative game each player selects a superhero to play and that player gets a unique superhero deck of cards that represent that hero's powers and abilities. You also select a villain and a location for your game. (I have many to choose from.) Like the heroes, the villain and the location each have their own unique deck of cards to represent them. First the villain goes. That means, doing anything special indicated on the villain card that happens at the start of the villain turn, then drawing a villain card and resolving that. And finally, doing anything special indicated on the villain card that happens at the end of the villain turn. Then it's the Heroes turn to go. We each get to play a card from our hand, then activate a power that we have (as indicated by cards we have in front of us) and then, to end our turn, we draw a card. Lastly the environment gets to act. Well, not "act" so much as players need to check in with the environment to see what's going on. These are things that you’ll have to deal with thematic complications. For example: in on game we played the environment card revealed that the Paparazzi had arrived on the scene and that we couldn't use our powers until we got rid of them. ("Not now, Lois! I'm kind of in the middle of something!!) These elements: Heroes, Villain, Location mix and match together to create a story like one in a comic book! 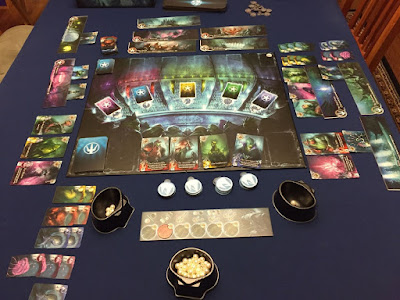 12 – Abyss
Abyss is set in this sort of fantasy undersea world where sentient undersea races vie for supremacy. Players play cards to gain the favor of the undersea factions and in turn take control of locations in the undersea kingdoms. The board is set up in three tiers. At the top is a card row where you can draw faction cards to add to your hand, but there's a catch. You must first offer up each card that you draw to your opponents to buy. That might not seem fair, but if your opponent does buy a card that is drawn during your turn, you get the money! Currency in Abyss is represented by pearls. (Which are actual pearlescent plastic spheres that look like pearls! Cool!!) In the middle of the board is another place to gather cards. These cards you get to keep uncontested, but they are made up of the rejects from the draw phase of the previous tier. Still once the stacks of these cards gets big enough, they are certainly worth taking! The bottom tier is the Diplomat row. It's made up of large tarot sized cards featuring fantastic artwork that represents different examples of the undersea peoples. These grant different powers and victory points. You purchase them using the smaller faction cards that you gathered in the upper 2 tiers. Some diplomat cards also have a special key symbol on it. If you get three of these you automatically gain a location. Locations are worth extra points at the end of the game, but they take away the powers of the Diplomats (with the key symbols) that you used to purchase them. So, there's a bit of a push and pull there as you try to get the most use out of your diplomats before they become assigned to a location. The game play of Abyss is intuitive and fast. It's full of interesting choices and the production is drop dead gorgeous! 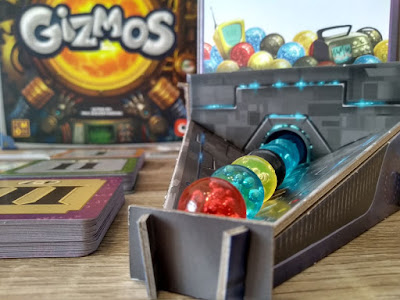 11 – Gizmos
Gizmos is a game with marbles where you collect marbles to buy cards to collect more marbles to score points. It's what is known in the biz as an “engine building” game. Your goal is to acquire benefits (through the cards that you buy with your marbles) that compliment each other. Gizmos is a “marble dispenser” game like Potion Explosion, and is by the same publisher. The dispenser here provides a selection of 6 marbles at a time. When one is pulled out, the marbles slide down and a new marble from the dispenser is revealed and available to pick. Sure, this can all be done with cards, and there are games that do that. But, the dispenser does it automatically. It’s maintenance free, and it really speeds up game play. Game play is all about getting marbles, and about using marbles to make “gizmos” that get you more marbles, that score you points. This is one of those games where effects cascade. Where one thing causes another thing, causing another thing, to happen. It’s all very satisfying and fun! Gizmos is a favorite, and the marble dispenser looks so cool!
Posted by Jeff Moore at 1:32 PM