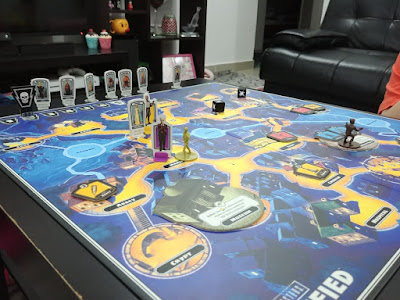 20 – Horrified
Breaking into the top 20, we have Horrified. Horrified is almost my most favorite cooperative game. (There is one other cooperative game that makes it higher on the list.) In Horrified players work together to battle various classic Universal Monsters! These old movie monsters are more cheesy than scary, and they make perfect villains for a family board game. There are 7 different monsters in total. Players face two of the iconic Universal Monsters at a time, and the game advises ways to mix and match these combos to adjust the game’s difficulty. You have Frankenstein's Monster, the Bride of Frankenstein, the Creature from the Black Lagoon, the Mummy, Dracula, the Invisible Man, and the Wolfman. Each monster carries it’s own unique victory conditions that are thematically based on the monster’s original movies. The theme is rich and beautiful and perfectly implemented. Players work together to protect the innocent citizenry of the fictional 1940’s period city represented by the game board, and to overcome the threats posed by the individual monsters. Horrified is a new game to my collection, but it was an instant hit with me and
Julie
. (Thanks,
Lisa Medley
!) As a bonus, Horrified is inexpensive and available everywhere. You should pick a copy up for your family now! 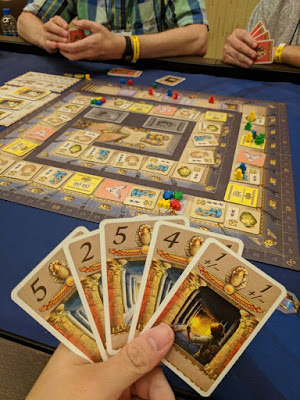 19 – Luxor
In Luxor players are Archeologist Explorers racing through the dangers and mysteries of a newly discovered pyramid to gather lost treasures and reach the central chamber where the greatest of all treasures awaits (a bunch of victory points!) Luxor has a big beautiful game board that you set up and fill with treasures (tiles) prior to play. The board is a track that moves in a spiral toward the center chamber, and every other tile represents another chamber in the pyramid, and another chance to uncover valuable riches. Each player has a team of explorers represented by meeples. You begin play with only two, but you gain more as you delve further into the pyramid. Explorers move by means of cards played from a player’s hand. Luxor uses an interesting hand management/restriction system. In Luxor you never rearrange the cards in your hand. You keep them in the order that they were dealt to you. You always end your turn with 5 cards. On your turn you must play either the left most end card or the right most end card from your hand (so you always have a choice of two cards.) Now, with 4 cards remaining in your hand, you draw a new card and must always place it in the center of your hand between the two sets of two cards. This means that any new card that you draw will always take at least 2 turns to come into play. This card mechanism is part of the interesting puzzle of Luxor as you plot your movement turns ahead trying to get the right card to come up just when you need it. As you remove tiles from the board each time you explore a chamber, those chambers are cleared. Future meeples that enter the pyramid later will skip right over the cleared chambers allowing them to move through the pyramid more quickly. Treasures score points on their own or contribute to sets that score points collectively. You can even discover secret passages that allow later explorers to move through the pyramid more quickly (like the secret passages in Clue.) Luxor is another game that nails it’s theme. It looks great. It plays great. (And, I think this one is another of Julie’s favorites!) 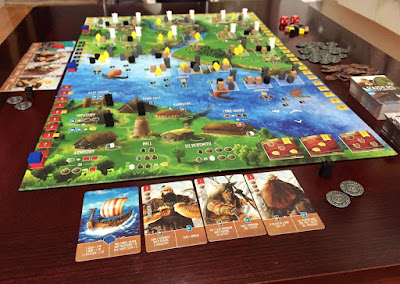 18 – Raiders of the North Sea
Raiders of the North Sea is a worker placement game. It’s the highest rated worker placement game on my list. (So, it must be the best!) In Raiders you place a worker in a spot on the board, just like in any other game of this sort, but then after you perform the action of the location you just occupied, you take a second action by removing a different meeple from the board. (You will always have one meeple in hand.) You start with limited action spaces in town, but open up more spaces when you sail your vikings across the water to raid. Use your meeples to work in town to gain resources and hire new crew (cards that grant benefits.) Raid to gain more resources and glory (victory points.) Raid spaces have new meeples of a different color that you can then take off the board to use. Certain spaces require that these new differently colored meeples be placed on them to work, so now suddenly through raiding, you’ve grown more powerful. But, not just you, your opponent too can now take these meeples once you’ve placed them out on the board, so raiding benefits the whole village, not just you. This progression is thematic, and happens organically during play and is part of the design brilliance of Raiders of the North Sea, my favorite worker placement game! 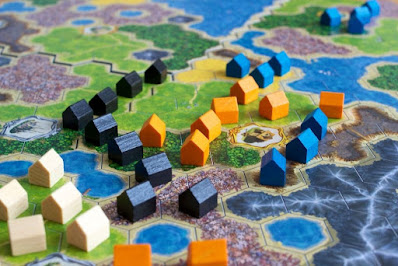 17 – Kingdom Builder
In Kingdom Builder players place little wooden settlement tokens out on a board that is a map made up of hexagonal tiles displaying differing terrain types. The game comes with several double sided boards that can be placed in a variety of arrangements to ensure that each game is different. In addition, goal cards determine how victory points can be scored, and these too change from game to game. Game play is deceptively simple. You have a single card in your hand that shows a terrain type on it. You must place a settlement on the board on that terrain type. If possible this must be placed next to another settlement of your color. While that may seem limiting, your choices are usually quite varied. Placing settlements next to certain features on the board will grant you special powers that will let you break some of the placement rules or place additional settlements. These powers, once obtained, stay with you from turn to turn and chaining the effects of your powers can lead to very satisfying turns. In addition to these features, you must play to the goal cards which might give you victory points for having settlements near mountains or water, or for settlements arranged in a straight line, for example. Kingdom builder is a great, puzzley game with simple mechanics and engaging game play. It’s awesome! 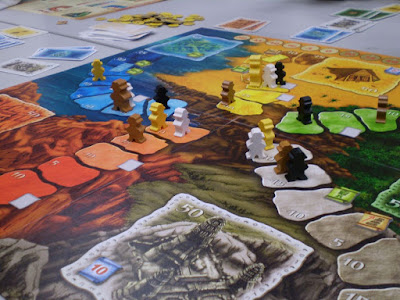 16 – Lost Cities the Board Game
There is also a card game called, Lost Cities by the same designer, but that one is two players only. The board game plays up to four. In this game you are explorers trying to find four lost temples in the jungle. (Maybe these are the same explorers from Luxor, or Karuba, or Quest for Eldorado?) You move your meeples along paths towards the temples by playing cards from your hands. The cards that you play are arranged by suits in sets in front of you, and you can only ever play a card that has a higher number value than the one that you played before! The suits are colors that match the paths to the temple. Play a blue card. Move your meeple one step on the blue path. There are things that you can pick up from the paths along the way for bonuses and at the end of the game you get victory points based on how far along each path each of your explorers has gotten. Every player also has one boss explorer that is a bigger meeple than the others and that meeple earns double points for the location that it is on. This one is easy to teach and quick to play. The set-collection and card play are the core aspects of the game, and they are interesting and fun.
Posted by Jeff Moore at 9:06 AM