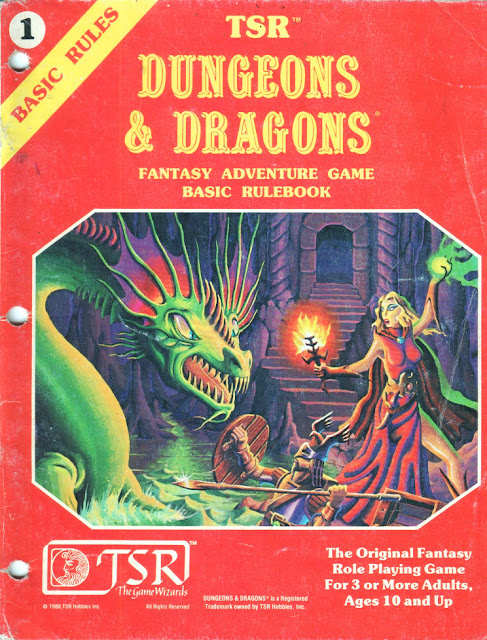 Basic Dungeons & Dragons was born of a different need. The need for a version of D&D that could be learned directly from the book without the assistance of others who had played the game. This is not how I learned to play D&D. I was taught. If I had tried to learn the game from the AD&D 1st Edition Players Handbook, I would have failed miserably. The AD&D rules are reference books, not instruction manuals. Learning to play D&D from them would be similar to trying to learn to speak with nothing but a dictionary, or like trying to learn how to cook by looking at a restaurant menu. So, Basic D&D was born.

To make Dungeons and Dragons more accessible, many of AD&D’s processes were simplified, streamlined or completely eliminated. At the time, I saw Basic D&D as inferior to AD&D. I felt the step down in complexity was equivalent to a step down in quality, and I didn’t embrace Basic D&D at the time. I could not have been more wrong. In simplifying and streamlining, Basic D&D fixed a lot of AD&D’s ugly warts. It’s a better game by far, but that didn’t stop the naysayers (myself among them.) The biggest argument that we had against the system (and I believe this was common for many) was that players needed to be able to choose to combine their character’s race with their character’s class. This is something that Basic D&D doesn’t allow players to do. 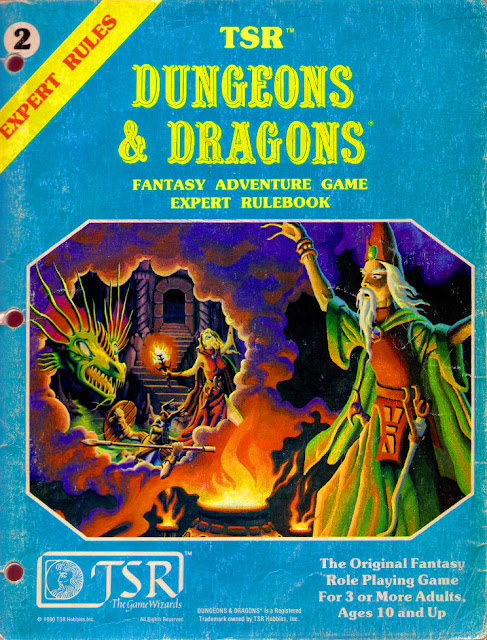 For example: in Advanced D&D a player might choose a Dwarf Warrior, or an Elf Wizard. With Basic D&D class and race are the same. If you choose to play a Dwarf. Dwarf defines your race and your class. If you choose to play a Wizard, then you are a Wizard, and your race (which is undefined) is human. This simplification was seen as a loss of agency. The thing is, AD&D placed many confusing restrictions on which classes each race could pursue. The choices weren’t as varied as we led ourselves to believe, and much of this player “agency” is more impression than practice. I wish I had seen Basic D&D then as I do now, because it’s a great game that I mostly missed out on.

On my shelf, I have the Basic D&D Rule Book which takes players up to level 3. This was included in that box set that I got for Christmas in 1982, but again the copy I have now is a replacement purchased on Ebay. I also have the follow-up book called the Expert D&D Rule Book which takes players from level 4 to level 14. The AD&D rules take a character up to level 20 and even higher, but I’ll be darned if I have ever had a character higher than level 10 in my almost 40 years of playing the game, so the Basic and Expert rules would certainly be enough for most. 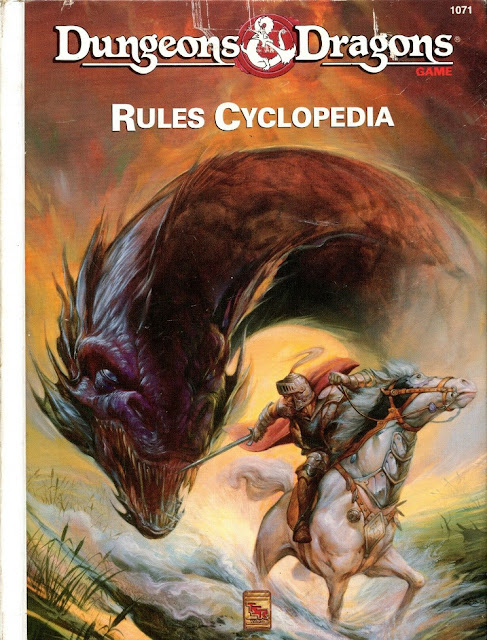 In addition to the Basic and Expert D&D Rule Books, I have a hardcover book called the Dungeons & Dragons Rules Cyclopedia on my shelf. This tome combines most of the material published for Basic and Expert D&D as well as material from a Master set, and an Immortals set. The Rules Cyclopedia can take characters to level 36. It contains player rules, monster descriptions, Dungeon Master rules, and details of a world called: Mystara (including an original pantheon of deities.) Mystara is an incredible setting for high fantasy adventure, and one that has been completely ignored in all other versions of D&D. If I had to keep only one D&D book in my collection, I would keep the D&D Rules Cyclopedia. It is the very best single D&D rules volume ever published.
Posted by Jeff Moore at 9:44 AM