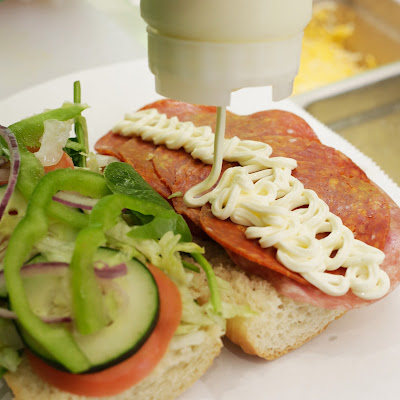 The one about how I, being a connoisseur of real mayonnaise, got us all a free sub sandwich.

(I will make a reference to this story in an upcoming post. So, I thought I should share it here.)

I mentioned before that David Crockett, Robert Briggs, and I for a short time (a very long time ago) would play Warhammer Fantasy Role-Play in the back room of my sister Sally's house. (The reason for that particular location choice is a story all its own and best left for another time.)

Back then we were playing on Friday nights. David or Robert whose ever turn it was to drive would pick up the other and then come to get me at my work. I worked until five and once they got me we would head out to Broken Arrow.

Yes, that's right, every Friday from Tulsa to Broken Arrow in five o'clock traffic. This particular Friday, traffic was especially slow and we discussed the possibility of pulling off somewhere to get dinner and to allow some time for traffic to thin.

David knew of a Bill and Ruth's Sub Shop right off the highway that would be convenient and suggested it. Robert said that it sounded good to him and all expected that I would heartily join in as my love of all things edible (or even semi-edible) is nearly legendary.

But, here is the one time that I surprised everyone by not going along with the already majority consensus of my friends, and vetoed the selection. I had nothing against a sub sandwich and said as much, but I didn't like Bill and Ruth's (at least not at the time.)

My reason was only this: I love sub sandwiches with mayonnaise, but the condiment used by Bill and Ruth's, at least the ones I had eaten at in Tulsa back then, tasted like salad dressing. You know, like Miracle Whip, and this I did not like at all. It didn't even taste like good Miracle Whip, more like cheap white label generic, "salad dressing," which I believe is what it was.

Now I could have been accommodating and simply chosen a different dressing for my sandwich, which would have been the polite thing to do in these circumstances, but for some inexplicable reason, my mind was firmly set against Bill and Ruth's. "Can we do a Subway, instead?" I suggested.

David and Robert agreed that Subway, for them, was just as good. But, such a change meant that the logistical convenience factor was lost. This being the reason that the sub shop option was even mentioned in the first place.

Robert and David wracked their brains trying to think of a Subway anywhere along our projected course, but both agreed that they couldn't come up with a single one. Discouraged, and nearly heartbroken, I was about to abandon the idea of a sub sandwich all together when, I spotted it!

"Look, there, right there just off the highway, that's a Subway right there!" I proclaimed, pointing just ahead.

And sure enough it was, a Subway ... a hero sandwich oasis glimmering like a beacon as the evening sun hanging low in the sky shined directly onto its door, and reflected back at us threatening to blind all on-comers and cause a multi-car collision!

Never before or since has the promise of a sub sandwich been both so tantalizing and so dangerous! My heart palpitated with excitement as we pulled up to the door to see a sign in the window, "Grand Opening!"

This was the reason neither Robert nor David knew of this Subway. It had not even existed before this very day! It was as if God himself wanted me to have a sub sandwich with real mayonnaise! And oh, how right this was, for when we got inside we were greeted with another surprise!

A sign on the counter read: "Today only! Grand opening special! Free six-inch cold cut combo with any drink purchase!" We congratulated ourselves on our luck, and I now no longer felt like a "heel" for holding out for a sub sandwich with real mayonnaise.

But my story doesn't end here. There is just a bit more to tell.

You see, when it came time to order my sandwich I had grown so enamored by the thought of the delicious mayonnaise that brought me, neigh brought us all, to this miraculous outcome, that I asked the sandwichteer who was preparing my sub to grant me EXTRA mayonnaise!

Eager to please his inaugural customers, the young man complied, and then some, adding a not inconsequential amount of extra mayonnaise to the six inch sub. He looked up and seeing the crazed look in my eyes, asked almost timidly, "Is that enough?"

I had gone insane with the power and promise of infinite real mayonnaise. "No!" I said, "Give me more." He repeated the process from before, and I soon beheld the master piece of a sandwich before me: three kinds of meat, every type of veggie that they offered in the sandwich buffet including peppers, and a literal mountain of mayonnaise.

He wrapped the monster sandwich with some difficulty and after paying for only our drinks, myself, Robert and David selected a table and sat down to partake of our free Subway dinner.

My sub weighed heavy in my hands. It was too large to get my mouth around, but undaunted I squeezed the sandwich to force it smaller and shoved it in to take a huge bite.

"Mmmmm! Mmmmmm!" could be heard through out the small sub shop as mayonnaise spurted from my lips, spilled down my chin, and covered my hands. It was this Subway's grand opening, "Money Shot!"

The spectacle proved too much for Robert who was now laughing openly. I always enjoyed Robert's laugh, it was genuine and infectious. David joined in. I was too enraptured by real mayonnaise ecstasy to care. I just enjoyed my sandwich.

The memory of this entire experience sticks with me to this day, and perhaps because of that, I remember that sandwich as the best sub sandwich I ever had.

It must have made quite the lasting impression on Robert as well, because years later when I told him that things with Gayla had grown serious and that we were engaged to be married, he had only one question for me.

"Has she seen you eat a sandwich?"

(As a final note: Bill and Ruth's now serves real mayonnaise, but I am fairly certain that the events described above played no part in that decision.)