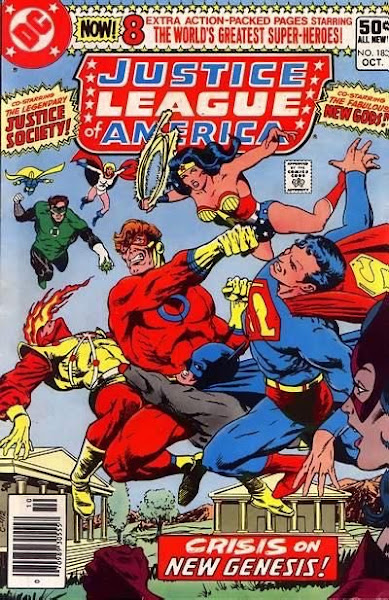 The JLA/JSA team-ups are an interesting thing. In 1956, Showcase #4, reintroduced the superhero character known as the Flash after a 5 year absence. This Flash is a revamp and recreation of the character. Really, only the character’s name and powers are the same as his counterpart.

This leads to the return and rebirth of other characters like Green Lantern and Hawkman. By the time I started reading comics, the period prior to the superhero resurgence that began with Showcase #4 was named the Golden Age of Comics, and the period that followed with it’s newly reinmagined heroes was named the Silver Age of Comics.

The Justice League of America was a creation from the Silver Age of Comics and featured the new versions of heroes like the Flash and Green Lantern, but readers wanted to know what had happened to the earlier versions of the characters. Flash #123 (1961) featured the story, “The Flash of Two Worlds,” written by Gardner Fox and drawn by Carmine Infantino, which answered this question.

To explain how other versions of their heroes could exist, or how Superman who was originally introduced in 1938 hadn’t aged a day in over 20 years, “The Flash of Two Worlds” introduces the concept of a parallel earth: Earth 2. This Earth was older than “our” earth. The Superman of Earth 2 had come to earth in 1938, and was turning gray. To differentiate the older Earth 2 team of heroes from the modern Justice League, their team was the Justice Society of America.

As for that second thing, the art of Dick Dillin. Dick Dillin’s artwork is fantastic, and he drew every issue of the Justice League that I read as a kid, including issue #183. Dick Dillin’s art is synonymous with the Justice League of America for me. He drew 115 issues from 1968 until his death in 1980. Issue #183 was the last issue that he drew. It is also the first part of a JLA/JSA team-up story: "Crisis on New Genesis" or "Where Have All the New Gods Gone?"

I couldn’t pick any other issue but #183 from this set. 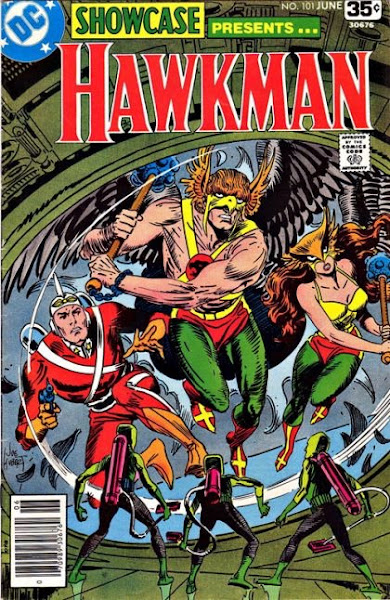 Showcase, which was the title that reintroduced the Flash, had been out of publication since mid 1970. It came back in September of 1977 as part of the DC Explosion. The short run featured three mini-series, each three issues long, a special one-shot issue #100, and then was canceled with issue #104, which was a one-shot war stories issue. Showcase #101 begins a three part mini-series staring: Hawkman, Hawkgirl, and Adam Strange. This is a favorite! 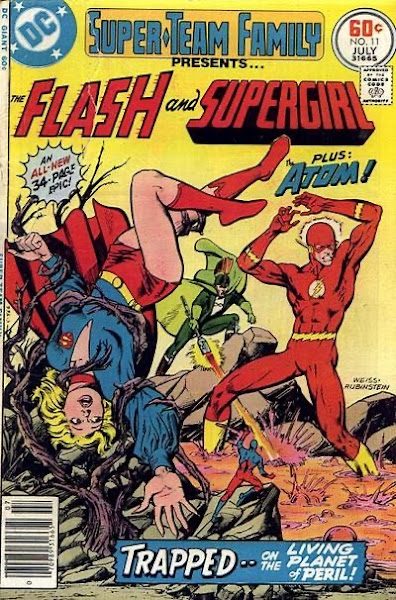 Super-Team Family #11 stars the Flash, Supergirl, and just a tiny bit of the Atom. The issue has beautiful art by Alan Lee Weiss. 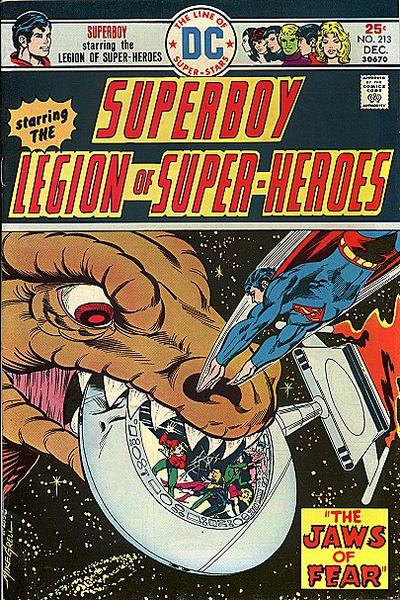 Superboy and the Legion of Superheroes #213 is written by Jim Shooter and drawn by Mike Grell. Jim goes on to be a big wig at Marvel comics and Mike Grell becomes more well known for his character the Warlord and for drawing and writing Green Arrow, but I will always associate both these guys with these early issues of the Legion of Superheroes.
Posted by Jeff Moore at 11:46 AM